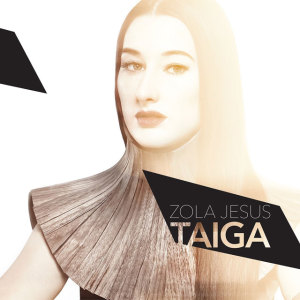 Musicians and trees go well together. Quite apart from the fact a lot of music is made from wooden instruments, those who play or write for them have been repaying the debt with odes to the forest for centuries. From the vivid scenes created by composers such as Beethoven and Sibelius to, er, Sting‘s plea on behalf of the rain forest, the green matter has been a consistently strong source of inspiration. And so, for her fourth album proper, Nika Danilova – the force behind Zola Jesus – draws on the forests of America and Russia as her creative muse, flying in the face of the Cold War as she does so.

There are signs this album leads towards her ancestral East rather than the West, where she lives, for its title takes the Russian name for boreal forest. “It’s a dark, dark place,” she sings in Dangerous Days. It’s a powerfully enchanted place, too, as the music, full of subtle Eastern inflections, looks to convey the ‘feral, untapped world’ of which Danilova speaks when discussing the album.

To evoke this world it feels Taiga is unleashing the full force of the forest itself as a massive musical instrument. There are some odd, almost supernatural sounds in the background at times, primeval chants from the forest’s core that can be heard at the start of Ego and the title track. In both cases majestic, rough-hewn blocks of strings and brass make themselves known, soaring like giant redwoods. Even the percussion is drawn from the trees, with the great big drumming for Hunger and Go (Blank Sea) seemingly secured through the mass beating of enormous tree trunks on location. The strings and brass remain deliberately coarse, as though hewn from bark, while the widescreen production speaks of Nika’s relatively recent experiences working with M83.

Above all of this is Danilova’s piercing voice, with its ability to cut through textures like the sharpest saw. It’s not an instrument to lull you to sleep, but one to inspire, strengthen and ultimately rouse – and it has the lyrical power to match, simply but directly. “I got the hunger in my veins,” proclaims Hunger, proudly, while the brassy It’s Not Over declares defiantly that “it’s not over tonight”. There are moments of vulnerability, too. “How am I supposed to survive?” she wavers at the a cappella beginning of Nail, before another huge, skyscraper chorus crashes in to what is essentially a piece of intense allegory. “Set me free, pull the nail out with your teeth,” she entreats, “don’t leave me wasted”.

Elsewhere, Lawless and Long Way Down power forward with a thrilling combination of strings and drums that proves ultimately intoxicating, while the contemplative Dust, a study in electro with those far off primitive voices, proves Danilova has more than one dimension to her extraordinary voice.

At times the sheer strength of Taiga is as awe-inspiring as the trees that inspired it, and only occasionally does the fairytale element threaten to become too strong. It is without doubt Zola Jesus’ most heartfelt utterance to date, the emotion coming from her very bones – a case where you really can see the wood for the trees.