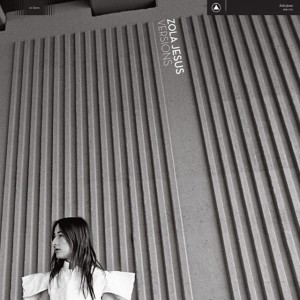 When an artist re-works their material, the results are more often than not a disappointment. Such projects are not as straightforward as a cover, a remix or an acoustic version. When the original songs are as perfect as those of Zola Jesus (or Nika Rosa Danilova, to use ZJ’s real name) the idea of deconstructing and repurposing into alternative versions is enough to start series of palpitations.

Fortunately, Danilova has some quite brilliant collaborators on this project, in the shapes of producer JG Thirlwell and the wonderful Mivos Quartet. Thirlwell of course is most readily associated with his alter-ego Foetus, or his production work for the likes of Swans. However, there’s little sign of the gritty, tortuous atmospherics he is best known for; this is surely one of the cleanest, most focused recordings and production jobs he’s been involved with.

Zola Jesus of course is not beyond chilling her audience to the bone, not just with her voice but also her claustrophobic use of electronica. Here, everything is presented with a clarity that turns any pre-conceived expectations on their heads. Stripped of the electronic influence, these songs place Danilova front and centre, making her masterful vocals the primary focus, as if they needed highlighting any further. With Mivos Quartet providing her backing she’s no longer in the confines of the club; instead she’s closer to the concert hall and her operatic roots. The arrangements on Versions are designed, according to Danilova, to turn the originals inside out, to expose the source frameworks. This is quite a terrifying proposition; after all, hers is a voice that already achieves such a feat, bringing pain and hardship to the surface. To delve any deeper could be almost unbearable. But the delicate treatment applied to these songs makes them softer somehow, but nevertheless they still pack a considerable emotive punch.

The album opens with Avalanche (Slow), and initially her electro-pop trappings have been replaced with a solemn classical quality. A yearning bowed cello and angelic violins provide a heavenly backdrop; the mood established is akin to staring into the bible-black skies looking for answers in times of trouble. Danilova’s voice is packed with a yearning quality, sometimes reaching for the stars, occasionally just inches from the gutter.

At the album’s close and serving as a bookend is Collapse, a song that is raw with emotion. Zola Jesus’ refrain of “It hurts to let you in” contains so much pain that it’s palpable and hard to listen to. It is Mivos Quartet’s finest moment too, helping to push her to new heights. There was always a danger that this collaboration could have led to performances too polished and stripped of their power. Collapse is proof that this isn’t the case; it’s an assured vocal certainly, but it lets all the emotion flood out.

The only new track on Versions is Fall Back, which starts tentatively with the violins holding back as Danilova intones “you are my only one, in the deep I feel your body”. The elegance is shattered by a neat drum pattern and some dainty plucked strings. “I would do anything to be the world with you” she sings as the song reaches towards a euphoric climax. Sea Talk also employs a similar tactic, military styled drums and classy vocal hook drag the classical overtones towards the dancefloor, suggesting that her pop leanings can never really be stripped out completely. Seekir meanwhile is peculiar mix of overblown string stabs and dance motifs. Tribal vocals, a dub-heavy bass drum and a pulsing bass line find a curious balance between the classical and the popular.

These versions serve to highlight what we already knew, that Zola Jesus is a phenomenal talent. To have these songs reworked and in some cases made even more powerful than the original counterparts is testament to the skills and attention to detail of all those involved. Utterly majestic.