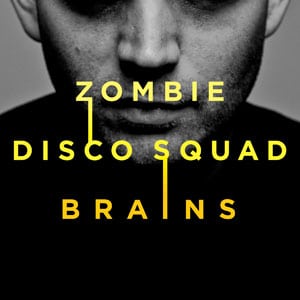 In a shocking development, the man in the mega-eyeliner styling himself as a zombie, seems rather to like drugs. Mmm… delicious drugs. And he makes music that no doubt sounds ultra-super-lovely-better-better-best when you’re so off your noodle that your hands look like a pile of uncooked chipolatas.

The kid’s show sample on the opener, It’s Early, is so irritating it brought us out in huge hives that spread across our entire bodies making us look like a squad of zombies. Ah! We get it now. How really clever. Brains, the next track, continued that experience of being assailed by some guy who really likes dicking about in GarageBand.

Thankfully Just Can’t pulls the record’s head out of the cavernous anus it was previously stuck up. It’s expansive house which makes you jerk and twitch like an extra in the Thriller video. The shambles looks like it can be averted at this point. Ibiza Hooligan is similarly good fun. It’ll have you shaking your rotten limbs while you feed on the corpses of the fallen or, you know, ordering another pint and getting a little dance on.

Righteous Sound, ft. Omar, is cheesy. Not that it’s necessarily a bad thing. We all love a big slice of gouda, right? Be Down feels like a ’70s cut pushed through a 21st century grinder and that’s no bad thing. It’s catchy and brilliantly put together. Timesome continues the killer run.

Twerk sounds like slang that we are way too old to get but it’s an intriguing track that twists your head with a baseline that builds and worms its way right into the centre of your skull. But Goodnight, the closing track, is 1:27 of filler, fitting for a record that opens with filler too.

Zombie Disco Squad is good. He knows how to make killer tunes. But Brains is a meagre meal. If you were a zombie hoping to feast on the contents of this head, you’d be sorely disappointed – like the undead creature who rejects Homer Simpson due to his tiny portion of grey matter. This feels like an LP that needed more time to gestate and give the excellent tracks more company.