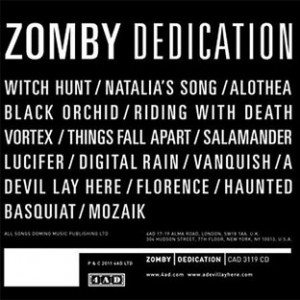 UK producer Zomby knows that anonymity can be a blessing – especially in a genre that spawns tensely regimented sub-genres and heated debates about how to categorise an artist. Dubstep, post-dubstep, rave, post-rave, and on and on. These taxonomic classifications, right down to phylum and subphylum, are purely academic, but they seem to carry a lot of weight in the electronic world. Meanwhile, here’s a hooded figure who has been known to not even bother showing up at gigs, an enigmatic producer with a sprawling, encyclopedic knowledge of his arsenal.

Dedication, Zomby’s sophomore effort, plays like something of a haunted house, all cavernous expanses interspersed with tense, often claustrophobic asides. Zomby’s gaze seems to flit from one darkened corner to another, from track to track, like that of a hyperactive genius or perhaps a trapped tourist frantically scanning the surroundings for impending danger.

But for all that hyperactivity (only two songs of 16 live past the three-minute mark), Dedication is also an intensely emotional album, an epitaph for a lost loved one. It rises and falls in waves and troughs, and as such, it makes for electronic music as fit for a rainy afternoon or a lonesome bus ride as it is for a certain sort of club scene.

Dedication is also Zomby’s first release for 4AD, and while that may seem like a bit of an odd fit (him being label mate of such indie stalwarts as Mountain Goats and Bon Iver), it could be an important step in bringing dubstep to the wider indie audience. Let’s not forget that 4AD’s own tUnE-yArDs is one of those rare beasts beloved by critics and fans alike. And, despite its sprawling 16 tracks and constantly shifting nature, Dedication is an album that doesn’t belong pigeonholed alongside its genre-minded dubstep cohorts. Certainly, there’s more to it than that.

First single Things Fall Apart features a sparse vocal from Animal Collective‘s Panda Bear, but it’s not really a standout track. Part of Dedication’s charm is that it requires attention to the long form. Here a driving beat, there a haunting, solitary piano (as on the excellent Basquiat).

This is a far cry from Zomby’s rave-centred debut, Where Were U In ’92?, but it’s a fine evolution, and an impressive exercise in wire-taut tension and atmospheric submersion. Dedication is an outstanding example of the possible emotional depth and breadth of electronic music.

There’s a sense of mystery and sadness, something profoundly human in all the beeps and bloops on Dedication. It’s an overheard confessional, or an electronic diary entry from a very sad masked man, and an artistically impressive and musically satisfying one at that.