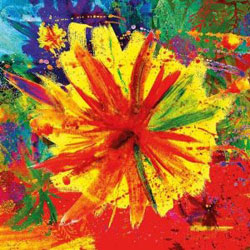 After what the band themselves describe as “two years of playing,experimentation and finding sounds”, Bristolians (via Mauritius and Japan)Zun Zun Egui bring us their debut full-length release. With twoearlier EPs (2009’s Bal La Poussiere, Kas To Là Senn from 2011) and, inparticular, their live shows garnering rapturous plaudits, Katang is taskedwith capturing the essence of /zun-zun-egui: no mean feat for a band of suchdiverse and ebullient unconventionality.

On first listen, this music feels like a rush of heady, multi-lingual,border-spanning exoticism. With vocals from Kushal Gaya and YoshinoShigihara delivered in French, English, Mauritian Creole and Japanese, thewords – often incomprehensible to the English ear – become another layer ofinstrumentation; chaotic on Katang, exuberant on Cowboy, tender andatmospheric on Sirocco.

Once you get beneath the headline dazzle, though, other elements emerge.Alongside the afrobeat-style interacting rhythms and jauntiness of trackslike Katang and Dance of the Cricket, others like Twist My Head and Mr Brownform a contrast. The latter, particularly, is a French-language progressiverock number, its tone anguished (or at least troubled), the time signatureshifting and switching. This is an album that will yield up more revelationswith each listen, one feels.

Gaya’s guitar work, supported by Luke Mosse on bass, is frequentlywonderful. The title track’s scene-stealing improvisations are a riot ofjoy and colour, while elsewhere the squalling riffs of Transport competewith Cowboy’s casually energetic brilliance. Best of all is the beautifulwork on Dance of the Cricket, less frenetic, but all the more memorable forit, the vocal, too, engaging and complementing the guitar’s gently intricatepatterns.

Another highlight is the title track, with which the album opens andwhich sounds as if the band are trying to cram an entire album’s worth oftheir ideas and spirit into a single – admittedly quite long – track; fromits dramatic opening sirens to the energy that bursts from its every note.Cowboy, which sounds like Katang’s sister track, is also great, allskittering, jerky, joyous rhythms. Some of the most entertaining momentsare those that bring a real WTF: Fandango Fresh’s “sexy worm”lyrics, those sirens on Katang, the disorientating brevity of Transport(more a “run off” from the preceding track than a track in its own right)and Shogun. Less showy but still quite lovely is Sirocco, whose guitarflicker genuinely seems to evoke the haze of the Mediterranean wind, theyearning vocal forming a perfect counterpoint.

If the serious, insistent Twist My Head sounds a little leaden, the vocaland guitar both actually groaning by the end, then this is just asmall downer on an album of far, far more highs. When a band sounds like ithas simply too many ideas to contain within one release, then it marks themout as a cut above. When they produce an album – like this – that isnear-impossible to properly describe on paper, then the only appropriaterecommendation must be, simply, to listen to it.