Zwan – Mary Star Of The Sea 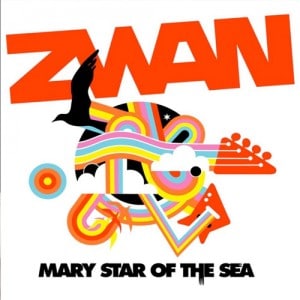 After collaborating with the likes of Marianne Faithfull and New Order, The Smashing Pumpkins‘ Billy Corgan surreptitiously put together Zwan in 2001.

Are female bassists just better than their male counterparts, I asked him? “I don’t know. It’s not on purpose,” he replied. “I just love to play with really great musicians.” After playing to small club audiences (lucky bums) in Los Angeles and San Diego, Zwan have finally expanded their horizons by releasing their much-awaited first album, Mary Star of the Sea.

If the album cover is anything to go by, Billy Corgan is seeing the world through pink lenses. The ’70s bubble letters and rainbow colours – and some ’70s-style song titles like Baby Let’s Rock! – are being interpreted as symbolic of what everyone calls the “new” Billy. Unfortunately, anyone who decides to steer in a different musical direction is prone to Freudian interpretations containing the phrase “life-changing”. How about just listening to the music? Now there’s a novel idea!

Billy has moved on. Call it reinvention if you like, but Billy seems to be showing another side of him. He’s dwelling on subjects, such as faith, that other singers are often afraid of acknowledging as being significant in the unpublicised parts of their lives. Faith, love, sunshine. Actually, this is Billy’s most “religious” album to date. “I think faith is everything,” he says. “Faith is the will to get out of bed, to write songs. I don’t think I’d be here if it weren’t for God.”

Even the first single Honestly starts off with “I believe”. The album could’ve actually been named after the track Declarations of Faith, since the theme is so prevalent throughout the album. The rock psalm Jesus I/Mary Star of the Sea is his “shout-out to the Creator, the Mother of the Universe” on faith – and it’s a very long one too. The Doors had The End – this is Zwan’s equivalent. A lengthy instrumental precedes the vocals and various riffs complement one another. Their build-up is in lineage with those of the ’70s masters. Think Blue Oyster Cult meets The Corgan.

As the opening track Lyric rolls, you think; “this is Billy Corgan?” It’s an upbeat debut, which will more or less set the tone to the general mood of the album. Billy has gone from Smashing gloom to Zwan bloom. It’s post-Joy Division; moonlighting with New Order has clearly been beneficial, a learning experience. And that influence shows, namely on the superb Settle Down, where a roaring riff races away at the end.

Endless Summer is yet another track where the guitars overlap, and it’s amazing how three guitars – count ’em, three – cannot upstage the drums. If I had a band, I’d definitely want Jimmy (or his clone) as drummer. Just take a listen to the crashing cymbals on Ride a Black Swan and El Sol, where the rhythm section is impeccable. There are also acoustic tracks. Of a Broken Heart and Heartsong provoke a “Huh? Smashing who?”

You guessed it, this isn’t the Pumpkins reformulated nor in any way revisited, nor even some carefully disguised rehash. Nostalgic fans beware! Of course, similarities will arise, but that’s mainly due to that distinctive, imperturbable, nasal voice which has become Billy Corgan’s signature. Ah, that voice. It is just as effective on the light-years-ahead-of-itself music of the Pumpkins as it is on the back-to-the-future Zwan. It’s got personality, to say the least.

And with Mary, the Pumpkin has turned into a Zwan.