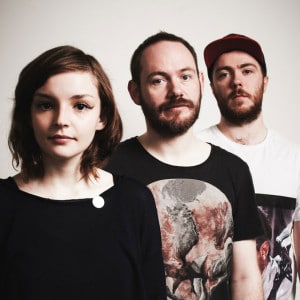 Today is apparently the hottest day of the year so far, in fact, it’s hotter than Barbados. Whilst location-wise Barbados might be a better, there’s possibly no finer venue for Chvrches to be playing tonight. Its historic grounds are quite wondrous and look utterly beautiful as the sun finally begins to relent and the stage lights begin to bathe its historic architecture in forceful reds, blues and purples (or a mix of red and blue, if you prefer).

Chvrches are still relative newcomers, formed in 2011 and featuring in BBC’s Sound of 2013, they still only have one album, The Bones Of What You Believe, to their name. Thankfully it’s an album filled with exquisite electro-pop gems because the entirety of the set is culled from it with Lies, Gun and Science/Visions and Strong Hand (a bonus track on the special edition of the album) all getting an airing tonight. If there’s a chink on Chvrches armour, it is only that there seems to be very little forward momentum at the moment which is something that needs to be addressed if they’re to build on their well-deserved success.

Such thoughts are incidental tonight however, as the songs they do have are all utterly glorious and benefit from the surroundings. If the band seems a little dwarfed by the huge stage, then that’s understandable, they’re perhaps more at home in a club. In Lauren Mayberry however, they have a vocalist that can raise hairs on the back of the neck. When she’s singing that is. Her between song banter is a little more brusque, pinpointing the touts that attempted to sell her a ticket to her own gig (“everyone’s got to make a living, but that’s a bit grubby isn’t it?”) or the online critics that moaned about the state of her “ugly fucking knees” when she once had the audacity to go on stage without tights on. When she takes the local residents to task over the band’s need to hit an earlier curfew (“if it’s too loud, maybe you shouldn’t live in central fucking London”) it’s clear that her cutesy elfin appearance hides a fiery side. “I’m 60% nice…not excessively cranky” she explains towards the end of the night. In a succinct set, the opportunities for Chvrches and Mayberry to go stray from the programmed path are rare but they are welcome. In fact Martin Doherty’s frenetic whirling stab at Under The Tide provides an odd highlight with him giving an energy infused performance that gives a little movement to a band that is otherwise rather stationary.

The closing trio of songs proves just how versatile they can be. The Mother We Share closes the first part of the set, with sweeping pop elegance that makes the heart swell and a lump appear in the throat. They return and slide into an encore of the brooding synth-pop glacier of Caught The Light, which is an odd choice, but a welcome change of pace and an antidote to the crushing heat. Finishing with By The Throat sums the band and their music up perfectly. It’s a bonefide pop nugget that possesses a deep raspy bass thrust and dark undertones. It might be beautiful, but like a rose, there are thorns.

Whilst it might be true that Chvrches need a little more material to truly stamp their authority on a gig of this size, only a churl would deny that even with the boniest of sets, they are a true delight.