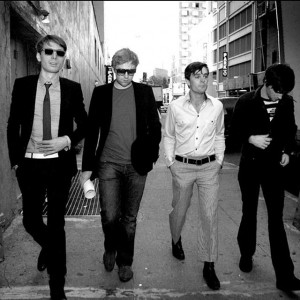 No one can master the combination of big indie choruses, disco grooves and beguiling lyrics quite like Franz Ferdinand. The 12-year-old band’s most recent album Right Thoughts, Right Words, Right Action, took a slightly more electronic turn compared to their previous records – calling in Todd Terje and Joe Goddard to help out on production duties. This summer, the band have been playing the album for the first time in front of festival crowds in countries including Germany, Mexico, France and the US.

Having played T in the Park festival in their native Scotland and 101 Sun Festival in Spain the weekend before, Franz were definitely in the swing of the festival season tonight.  And given the venue, a 200-year-old neo-classical building with a courtyard that holds 3,000 concert goers, it certainly felt like a festival.

The band got off to a solid start with No You Girls and the energetic Do You Want To, sending the crowd into a singsong. The hits from their eponymous 2004 debut still sound fresh 10 years down the line, but the newer songs garnered a mixed reception from the audience. The woozy organ and staggered rhythms of Evil Eye felt a little out of place, but when played immediately after Take Me Out, lead single Love Illumination fitted in perfectly. It sounded more electric live than on record, complete with a dazzling guitar solo.

Frontman Alex Kapranos makes good use of the venue’s acoustics, slowing down some tracks such as Jacqueline and Walk Away. Despite this, he maintained the contrast in tempos well throughout the set, breaking into Stand the Horizon’s rockabilly bass line and the fairground synth of Can’t Stop Feeling. A synthesizer distorted to sound like a baritone sax breathed new life into Ulysses.

This re-working of songs is vital to their lives sets, and those they leave untouched feel stale; Michael, for example, sounds tired, its fragmented chorus seemed hard to perfect in a live setting without it sounding like a bit of a mess.

For the encore, the band returned with Fresh Strawberries, before moving onto Jacqueline – another momentary lull. They redeemed themselves with their penultimate track, Goodbye Lovers and Friends – complete with an unexpected cover of Fat White Family’s Touch The Leather. The explosive This Fire provides an upbeat end to the night.

Judging solely on tonight’s performance, it would come as a surprise to many that things haven’t always been plain sailing for Franz Ferdinand. Following the release of their third album, they were apparently on the verge of splitting up, but after slowly making a cautious return to the live scene last year, playing smaller venues and a low key album launch, they have recaptured the confidence they once had. Tonight they were back on top.