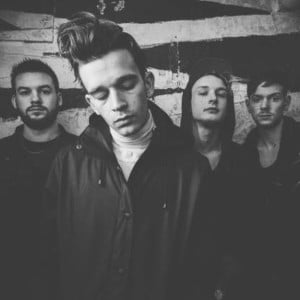 “If you wanna find love then you know where the city is” – the line blares amongst a backdrop of flashing black and white light as The 1975‘s Matt Healy sings in his now well recognised high-pitched vocals. From the screams of the crowd, it’s clear that love is right here in London, specifically at Brixton Academy, with a sold out crowd and a headline band ready and waiting with only their debut album to show for it.

Wolf Alice bring their indie-punk to the fast filling space, but the audience give nothing in return; the crowd is at a standstill and the band seem misplaced. Swim Deep, on the other hand, complement The 1975’s tastes nicely with their interesting, melodic indie pop that seems a perfect fit for the night. Unfortunately, the crowd is no more enthralled than they were for Wolf Alice and only highlights of their set – such as The Sea – bring anything more than clapping. They were obviously waiting for the band that brought just enough pop to their indie to get them into the charts and hearts; Swim Deep seem to have a hopeful future in this respect.

The 1975’s opening songs are a triumph. The City bounces and swings the quartet nicely into Milk, which captivates the audience with its impossibly catchy riff and upbeat atmosphere. Elsewhere, songs such as M.O.N.E.Y. and Talk! are expertly pinned against the impressive strobe lights and smoke that makes the four all black-clad band members stand out like mysterious silhouettes, even if sometimes they get lost amongst the otherwise black stage.

After an impressive start, both in the quality of the music and the visuals, things slow down; and not just melodically. Songs on the band’s debut self titled album that are fast, fun and full of energy on record, such as Settle Down and She Way Out, seem stripped of energy live. We wonder if Healy really needs all those synthesisers with his already ear-piercing voice, and after a duo of lengthy slow songs, the energy with which the band bounded on at the start is all but lost.

Heart Out, one of the night’s most successful tracks, brings the band back to their prime. Songs like this and Robbers (the most resounding performance of the night) highlight Healy’s voice, along with the crowd singing along. Mixed synths, bounding drum beats and a refrained style of performance carry The 1975 through the remainder of their set list comfortably.

They seemed expectantly uncomfortable in front of such a large crowd – after all, they are a band with just one album under their belt and, despite being together for some 12 years, don’t seem to have the gravitas to handle a venue of this size yet. Healy looked compelling with his trade mark hairdo and skin tight jeans, but he seemed shy, pulling at his jumper while singing. Even with hair flips and head banging during guitar solos, something was missing in their performance to make them stand out as a united band, ready to make their mark.

Fortunately, their uncomfortable demeanour does not stop massive hits Girls and Sex from closing the night with a bang. Sex, with its head racking guitars and teenage lust filled lyrics, was made colourful, this time with bright red lights. Perfectly timed lighting like this (even with a couple of hiccups), rich and energetic songs and saxophone enthused ballads is what made this night a success, with the music overriding any performance anxieties. Perhaps in a few years and with a few more albums The 1975 will be ready to play somewhere bigger, brighter and more colourful.