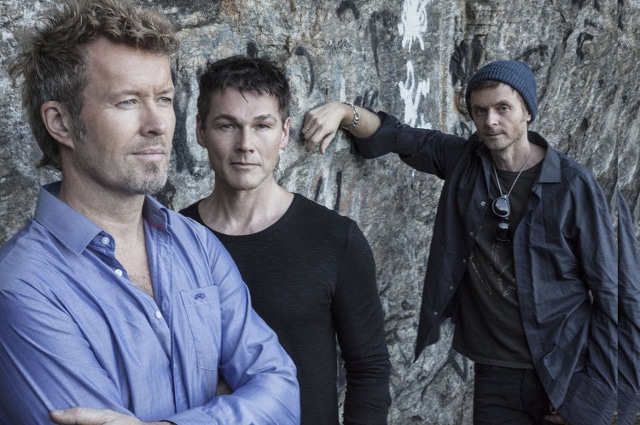 a-ha are celebrating 30 years since their iconic first chart hit and its equally iconic video, Take On Me. In that time, the Norwegian trio have been on hiatus twice – once in the 1990s and, most recently, after their 2010 tour. Back with 10th album Cast In Steel, they’re once more taking to the biggest of stages, including the showbizzy O2 Arena. Their loyal audience mix, featuring ladies of a certain age, male appreciators of Morten Harket’s cheekbones, easy listeners and dozing bairns, is present and correct.

Support act Anneli Drecker is on her third a-ha tour. The Tromsø native, dubbed ”the queen of arctic electronica”, has dovetailed acting on stage and screen with occasional vocal duties for Röyksopp, being the voice of dream pop band Bel Canto, and releasing three solo albums. Her latest, Rocks & Straws, marries English lyrics by Roy-Frode Løvland based on poems by Norwegian poet Arvid Handsen with her often experimentally structured music’s polished orchestral finish. In a cavernous performance environment, her voice is at least as octave-spanning as that of her compatriot Harket, and she divides her time between gamely fronting the songs centre stage and tinkling away at a keyboard.

Harket, now 56, seems forever destined to sport the face of a boy. His features, hairstyle aside, seem entirely unchanged, and he rocks a tight black t-shirt and leather jacket like a man some 20 years his junior. As a front man, his cool stage presence consists mainly of standing still and swapping sunglasses for architect spectacles and occasionally – to emphatic cheers from the ladies – removing eyewear entirely. I’ve Been Losing You, Cry Wolf, Move To Memphis and the ever-lovely Stay On These Roads, with its soaraway vocals, get the set off to a nostalgic, fan-pleasing start – so far, so expected – but there’s space made too for more recent numbers including the new album’s title track, which stands up well amongst the classics. It’s all melodious and in no way challenging or surprising – exactly what this audience would want from a band with neither need to nor interest in pandering to trends.

It speaks volumes for how a-ha work as a band that it falls to keyboardist Magne Furuholmen to speak most through the gig, and to sing when Harket, one of pop’s most recognisable vocalists if clearly a reluctant front man, is readily available in the wings. He and be-beanied guitarist Pål Waaktaar-Savoy each get a stint apiece on vocals in the middle of the otherwise hits-focused set, the latter singing his own song Velvet and the former taking on the title track from a-ha’s under-rated 2002 album Lifelines. There’s further breaking with scripts when, on Here I Stand And Face The Rain, Drecker emerges from backing vocal duties to take the lead, and you begin to wonder if Harket is off having a pedicure. It’s a peculiar song, and Drecker’s animated stagecraft stands in contrast to Harket’s furniture-like poise.

Harket returns to whoops and cheers for the tail end of the main set, including another title track, Foot Of The Mountain, and fabled oldies Hunting High And Low – complete with audience singalong – and Scoundrel Days. The encore opens with the none-more-dramatic The Sun Always Shines On TV – their only UK Number 1 single – and the rousing Bond theme The Living Daylights. It would be unthinkable not to wheel out Take On Me, and they duly oblige, leaving their most famous song till last. a-ha teeter close to being a tribute act unto themselves these days, yet they have enough hits in their arsenal and goodwill built up down the years to keep the faithful happy with concerts like this for a while yet.