A Winged Victory For The Sullen @ Cecil Sharp House, London 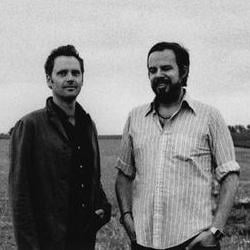 A Winged Victory For The Sullen

Since its release last autumn, Dustin O’Halloran and Adam Wiltzie‘s masterpiece A Winged Victory For The Sullen has rightfully claimed praise from all quarters, its meditative, almost cinematic character perfectly suiting the long evenings that followed shortly. Given the warm, inviting nature of the music off their self-titled debut album, it’s fitting that their London date (in the grandiose setting of Cecil Sharp House) offers a respite from the bitterly cold climes which have suddenly swept the capital.

Those arriving early expecting support Sleepingdog to be merely a variation on A Winged Victory For The Sullen’s vast soundscapes were in for a surprise. While very much another one of Adam Wiltzie’s many brainwaves (and at times using the sweeping sonic swathes that define A Winged Victory For The Sullen’s sound) it’s a far more structured, almost pastoral arrangement that recalls last year’s acclaimed Lanterns On The Lake, or instrumentation that recalls Ballboy at their most beautiful. Led by the chiming, interweaving guitars of Wiltzie and co-conspirator Chantal Acda, and then garnished with the latter’s mesmerising hushed vocals, the end result is a multi-layered, haunting vision of nocturnal, ambient pop music. As an exercise in enchanting the crowd before the main act, Wiltzie and co do a spellbinding job.

When it’s time for the main act to appear, they take to the stage quietly and without fanfare. Not that that’s necessarily a bad thing. Coming off the back of an album that is characterised by a certain dignified majesty, it’s entirely befitting. Wiltzie and O’Halloran are backed up with a three-piece string section throughout the performance, and play the self-titled debut (advertised tonight as “7 songs about broken hearts and dead people”) in full. From the opening chords of We Played Some Open Chords And Rejoiced For The Earth Had Circled The Sun For Yet Another Year it’s clear that there’s a near perfect synergy between band and venue, with O’Halloran’s delicate piano reverberating around the room, while the rich string accompaniment is given the space it needs to truly flourish.

It’s a theme that continues throughout the evening, with the haunting beauty of Requiem For The Static King Part 2 especially providing a mesmerising and hypnotic highlight as it ebbs and swells to its conclusion. With the heartbreaking A Symphony Pathetique and the sweeping All FarewellsAre Sudden ending the album, it was left to Wiltzie and O’Halloran to unveil a joker card (humbly introduced as “something we knocked up in case something went wrong”) – a seemingly untitled piece which, if a precursor to any further work, demonstrates the possibility of a darker, more dramatic sound than has been seen in their work so far.

As the crowd filters out, back into the cold of the winter evening, many still seem entranced by what they’ve just seen and heard. As well they might, given the stunning rendition of an already breathtaking piece of work. Any concerns about how well it would transfer live have been well and truly banished, and their vision of making a truly great late night record has been conclusively realised.