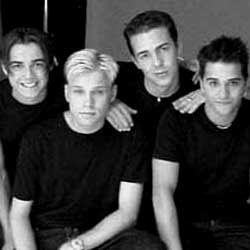 They’re a boy band with a search-engine-friendly name, they’re from the same musical stable as Steps.

As I write, they’ve just released one of the most catchy mass-market toons in ages as their debut single.

Tonight, a1 are in what is fast becoming an essential venue for commercial band launches, relaunches and reminders – Jeremy Joseph’s G.A.Y.

Last week Geri Halliwell turned up here with her celebrity friends in tow and performed solo for the first time since her split with The Spice Girls; this week we have this wholesome bunch of movers who would very much like us to buy their record, Be The First To Believe, thank you very much. Gary Barlow‘ll be here in a few weeks – what chance Robbie?

The PR for this band has been at pains to dress these guys up as songwriters and not just this week’s lookers. We’re told that ten of the new album’s twelve tracks are homegrown efforts; ra ra ra and a bottle of rum say we, but they still sound like they’ve been baked in a kiln by Pete Waterman. As we have seen with Steps, however, this is not necessarily a bad thing.

Tonight Mark, Ben, Paul and Christian are merely the support act for Martha Wash of The Weathergirls fame, so three tracks are all we get, and one of these is rather schmaltzily dedicated to the club. They really really really would like us to buy their record, you know.

This audience, one feels, would do anything Christian asked, but unfortunately the record shops are shut just now and there’s a boy band on stage, so maybe tomorrow. Their dances are slickly executed, the voices are pleasingly in tune and the band members are certainly decorous.

One could be forgiven for thinking for a moment or five that this lot had been targetted specifically at teenage girls and the gay scene; rather like Steps, in fact. But what’s wrong with that? All’s fun that starts fun. Take a look in the UK charts in the next week or two and see if this lot are hanging around the top of the pops.