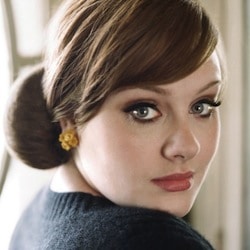 When you’ve sold two million copies of your new album in the space of four months, you’ve got to wonder who’s left to convince. This tour, announced before Adele Adkins’s annus mirabilis started taking shape, has turned out to be a reward to her fans, rather than any kind of promotional tool. These songs couldn’t be any more ubiquitous right now, but hearing her sing them in person is what Adele still has left to give.

Tonight is particularly special. Coming at the end of a month of touring, finally she’s back in her beloved London, and marks it by starting with Hometown Glory. It’s one of a few of her statement torch songs sung with a simple piano accompaniment (like her near legendary BRIT Awards performance of Someone Like You). It’s a set up that showcases her voice, powerful and pure.

There’s little doubt that her fans would be sated if that was the format for the whole night, but she plays with a full band where needed. And the approval her fans give her, whatever she does, is a rare form of worship. Appealing across gender and age, it’s nonetheless obvious that she has a strong kinship with other girls. It’s them who lairily bellow the words to every track back at her and it’s those same girls later seen with tears streaming down their faces as Adele powers her way through an emotive set.

She assures us that she’s not as serious as her music makes her out to be. “I like a laugh” she pleads, but there’s little doubt that it’s the big ballads that are her forte. Apart from set closer Rolling In The Deep, the upbeat numbers don’t really make the grade.

Perhaps it’s because these songs are so intensely personal, those taken from 21 written during the process of a bitter break-up. Any mention of that ex is greeted by a chorus of boos. “I put him on the guest list. Hope he’s not here” she tells us with a cheeky grin and a cackle.

The set list revisits both albums extensively. Getting through filler track after filler track in a workmanlike fashion, she saves all of the big guns for the end. A run of Chasing Pavements, Make You Feel My Love and then an encore of Someone Like You and Rolling In The Deep ensures everyone ends the night safe in the knowledge that Adele is a spectacular talent.

Her ubiquity will naturally attract doubters and detractors, but in general there is massive and widespread good will towards Adele. The material may essentially be middle of the road, but it’s a very nice road, and she’s powering down it in a car built to last. So much of her appeal lies in the dichotomy between her poised, elegant delivery and the Catherine Tate-esque character that doesn’t stop gabbing on between songs, and her personality again shines tonight. It’s clear that she’s appreciative and excited of the situation she’s found herself in and she seems emotionally equipped to take it all in her stride. The leaps she’s making and the nods to her musical integrity (cover versions of Bob Dylan and The Cure) suggest that this is still early days. One day she’ll have so many signature songs that her gigs will have no space for anything else.