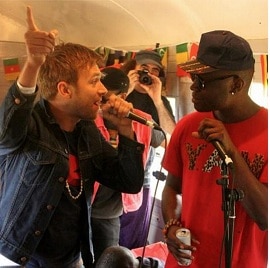 With 80 musicians hailing from locations ranging from Bamako and Brighton to Cape Town and Crouch End, all travelling around the UK in a specially chartered train to perform a series of freeform pop up gigs, Africa Express is not the kind of tour that happens every week. Perhaps almost inevitably the brainchild of that perennial polymath and Africa aficionado Damon Albarn, the objective of the project was for likeminded performers to spread the joy integral to the continent’s music to communities across Britain, ranging from local schools and factories to large concert arenas.

After a rollercoaster week on the rails, the party came to a close at London’s recently opened Granary Square. With no fixed line up or running order and very limited rehearsal time, it always ran the risk of being something of a hit and miss affair, and so it proved to be. Lasting five hours and with musicians coming and going with bewildering frequency, Africa Express’s biggest problem wasa sprawling lack of focus, but what worked did so rather magically.

Take for example a simple, stripped back performance of Melancholy Hill by Gorillaz featuring just Albarn on piano and the wonderfully soulful vocals of Malian singer-songwriter Rokia Traoré, which reduced the audience to hushed awe, or the exuberant balafon (an African glockenspiel) solos that accompanied some infectious early tracks led by celebrated n’goni player Bassekou Kouyate. Senegalese legend Baaba Maal appeared late with his usual charismatic presence and of the lesser known cast, London-based Ethiopians Krar Collective, virtuosos of the unique lyre-like instrument of their home nation, provided an intriguing contrast to the rappers and horn sections performing alongside them.

By and large, the African musicians fared considerably better than their British counterparts and it was unfortunate the latter were allowed an equal share of the billing. Jack Steadman of Bombay Bicycle Club was hopelessly out of place, Martina Topley Bird singularly failed to dazzle when compared to the likes of Traoré and her fellow Malian diva Fatoumata Diawara, and the guttural utterances of ‘human beatbox’ Reeps One were bemusing and irritating in equal measure.

The biggest surprise of the evening was the unexpected appearance of the admittedly now ubiquitous Paul McCartney, who decided to jump straight on the Eurostar fresh from receiving the Legion d’Honneur in Paris to join in the fun. Thankfully, the audience were spared the ex-Beatle’s customary Hey Jude knees up fare and were instead treated to a couple of lesser known songs from his back catalogue – Coming Up and Goodnight Tonight, with McCartney in noticeably better voice than in the Olympic stadium a few weeks ago.

Sir Paul’s crowd pleasers ushered in a more familiar feel to the last hour of the show, with tour participant John Paul Jones acknowledged in a spirited, Kano-led rendition of Led Zeppelin‘s Kashmir before the whole vast ensemble converged on stage to join in with Amadou & Mariam‘s Masiteladi. Seeing musicians waving placards bearing the words ‘tax the rich’ felt slightly incongruous with the multi-millionaire McCartney among their number, but like everything else with Africa Express, it’s all so sincere, well-intentioned and energetically delivered, it would be churlish to be too critical. It may have ultimately ended up being slightly less than the sum of its parts, but the fact this kind of adventure in cross-cultural collaboration has happened at all is a tribute to the commitment and open-mindedness of everyone involved.