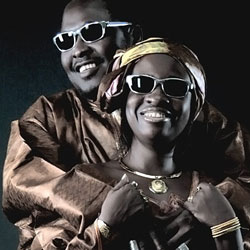 It’s taken three years for the shambling collective Africa Express to reach London. Set up by Damon Albarn as a response to Live8’s lack of African artists, the noble aim of the project was to present Western and African artists on an equal footing. Since then, a revolving cast of talent has turned up in places as far flung as Bamako, Lagos, Liverpool and Glastonbury.

The BBC Electric Proms’ stated aim of “new moments in music” would struggle to find a more suitable enterprise to represent its ethos in the first of two collaborative shows in London.

At KOKO, all was set for a long night – it takes 140 people a while to each have their turn on stage. In the end, seven hours just about covered a gig that featured a who’s-who of Africa’s up-and-coming stars, headed by blind Malian couple Amadou & Mariam, Senegalese singer-songwriter Baaba Maal, masterful kora player Toumani Diabaté and ngoni virtuoso Bassekou Kouyaté.

Alongside them from the western world were with Romeo Stoddart of The Magic Numbers, Flea from Red Hot Chili Peppers, Johnny Marr of The Smiths, Sam Duckworth of Get Cape. Wear Cape. Fly and of course Albarn himself. And the western protagonists for the most part seemed to be the artists learning from this richly collaborative exercise – the Africans were used to it.

Only Hard-Fi seemed to still believe they had to operate as a band unit rather than in tandem with other artists; when Richard Archer’s posse showed up, everyone else left the stage. Covers of Chemical Brothers‘ Galvanised and The Cure‘s Killing An Arab was compensation, however, and enticed more artists back on. Amadou, led on to the stage, caused appreciative applause before he sang or played a note. Sundry horns were stage left as – of all things – John Williams‘s Jaws theme was parped out. By the end of their short stint they’d won the crowd over.

Well before all that, Maal had opened the evening with a plea to consider Africa and to offer our collective love to its boys and girls. This would be as preachy as the evening would get; an introductory video had set the scene for the project’s aims.

Hypnotic Brass Ensemble‘s contributions were as visually striking as they were noisy; eight Americans waving their big horns in the air, they were joined by an assortment of western and African rappers for their rousing segment. Cutting the audience in two for a spot of echo-response wasn’t especially original but it was, as ever, crowd pleasing.

In amongst it all Albarn hovered, first on synths, then tootling melodica and banging tambourine, obviously delighting in being a component in one of the finest bands ever to be imagined into existence. VV Brown was in amongst it all somewhere too, but even divas used to leading their own bands were merely parts of a whole.

Fast forward 16 hours or so to the Barbican and Albarn was back, wearing the same clothes and ready to do it all again, this time for an all-seated crowd. Here the emphasis was less on Western and African artists in collaboration and more about showcasing the tourists’ own material. As such, the second show was a more structured affair than the endearingly chaotic first.

Still that didn’t prevent Albarn showing up with a guitar to assist with Amadou & Mariam’s pervasively catchy new single Sabali, a slice of new album Welcome To Mali, which he’d co-written and produced.

Already the evening had witnessed Nigerian percussionist Sola Akingbola as the first of last night’s artists to appear, draped in black finery and sporting shades at the front of a full band to perform his own material. A brief break and then Muntu Valdo appeared all in white with harmonica and acoustic guitar and warmed the audience up nicely in four songs.

Next up were Daara J Family, two guys in white smocks, one with dreds and the other in a Senegalese flag coloured beanie. Said flag also draped from a DJ deck from which pounding drum’n’bass backed their rapping. By this point the bulk of the audience was on their feet.

It was after the interval that things really got going. Diabat’s theatrically virtuoso kora duel with Kouyat’s ngoni underlined why he’s in demand by everyone from Albarn through to Björk. Quietly dignified in his magnificent robes, seated before his instrument like a king holding court, his was a mesmerising presence. But Kouyat matched him note for note in a thrilling performance that brought about a justified standing ovation.

Tonight Maal was in layers of widescreen white costumery, joined as became the norm by just about everyone, including Diabat with his kora and Albarn on melodica. He gradually de-layers as his singing energises the room before lapsing into a fiery dance routine and leaves to screams and whoops. Later, one fan caught up in the moment runs on stage to kiss several of the players, to the bemusement of most.

After all that, French-Algerian punk purveyor and rai star Rachid Taha‘s post-11pm addendum of a set, his first time here since the 1970s, felt like the sorbet to the side of beef. Arching and shimmying like a man possessed and in garb akin to that of Dustin Hoffman in Midnight Cowboy, Taha’s tiny frame too often pointed the wrong way, his back to the audience while The Clash‘s Mick Jones threw occasional rock shapes for his viewing pleasure. At times the band were so loud and Taha so croaky it was difficult to make him out.

But it had ceased to matter as the inevitable Rock The Kazbah – a song that might as well have been written for Taha – again won the day. By then Albarn had shambled back on for some impromptu backing vocals. After two nights in such company, it’s a struggle to imagine a more inspirational music event.