Blur perform at Africa Express: The Circus as part of Waltham Forest London Borough of Culture 2019. Photo by Brendan Bell

Back in February 2018 Waltham Forest was named the London Borough Of Culture for 2019 and one of the key events announced was a show entitled Africa Express: The Circus in a tent on Wanstead Flats. Damon Albarn provided the connection, the unofficial Africa Express leader and chief enthusiast growing up only a short distance from where tonight’s show took place. The focus throughout was on collaboration, inclusivity and coming together on the date that the UK was originally due to leave the European Union.

It is clear from the beginning that this is just as much a celebration of progressive human values and a social event as much as it is a music concert (Mayor Of London Sadiq Khan appears on stage to reaffirm this). It also becomes apparent that the usual criteria of assessing gigs isn’t really going to apply as strongly to tonight’s show, which over the course of five hours, sees a revolving cast of musicians from across the world take to the stage.

The early stages are, it’s fair to say, a bit of a mixed bag. The sound isn’t great to begin with and the unfamiliar collaborations result in lots of nervous looks being exchanged between musicians as they try to feel their way through the songs. Albarn acknowledges this when he addresses the crowd early on, commenting on how they have had “no time to road test” and have spent the last two days “working out what they have in common”. The delay of the UK leaving the European Union he says also presented “a different reality to the one we first imagined”.

Django Django are one of the first on stage, playing Skies Over Cairo with guest appearance from Tunisian singer Mounir Troudi. It sets a template for the rest of the night but the it’s negatively impacted by the bass-heavy sound. The early decision to give artists only one song each doesn’t help, resulting in a fragmented flow. It has a similar effect during Miziki by Ivory Coast singer Dobet Gnahoré and 1917 by The Good, The Bad & The Queen. It feels like there would be obvious benefits in allowing artists time to fully settle but it becomes clear there are just too many artists to squeeze in. 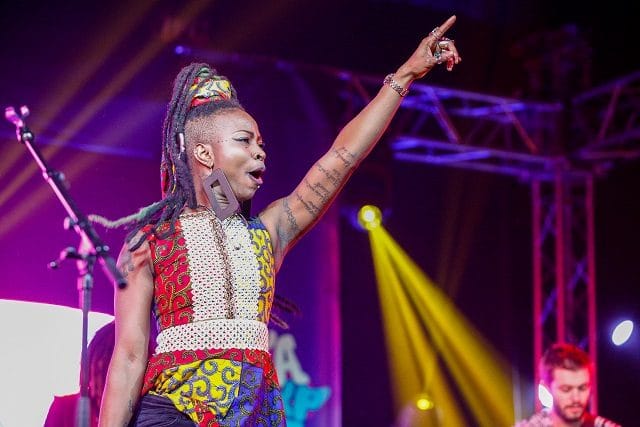 The long change-overs in between performances also disrupts the early stages. However, this improves as the night unfolds and most of the crowd seem to inherently understand that a degree of patience and goodwill will be needed. It feels like a small concession to make for the overriding message of positivity, not to mention the logistics of gathering over a hundred musicians from around the world together on stage.

The Krar Collective from Ethiopia are experienced performers and offer a stabilising force, impressing on Guragina, while punk duo Slaves make an impactful, powerful cameo on The Hunter (they also deliver a successful cover of The Guns Of Brixton by The Clash alongside its author Paul Simonon).

The acts keep coming fast. Joan As Police Woman, Rokia Traoré, Dobet Gnahoré and Wolf Alice singer Ellie Rowsell join forces for a cover of I Wish I Knew How It Felt To Be Free by Nina Simone and Joan Wasser stays on for a ragged, less successful cover of Kiss by Prince with help from the Kaladjula Band from Mali. Keeping up the with personnel changes provides an enjoyable challenge and an example of the high levels of musicianship on display is forthcoming as Tony Allen is replaced by Seb Rochford on drums. Next, Pauline Black comes on stage to sing Can’t Get Used To Losing You, a heartfelt tribute to the late Ranking Roger (with Jah Wobble and Dennis Bovell providing musical backing). 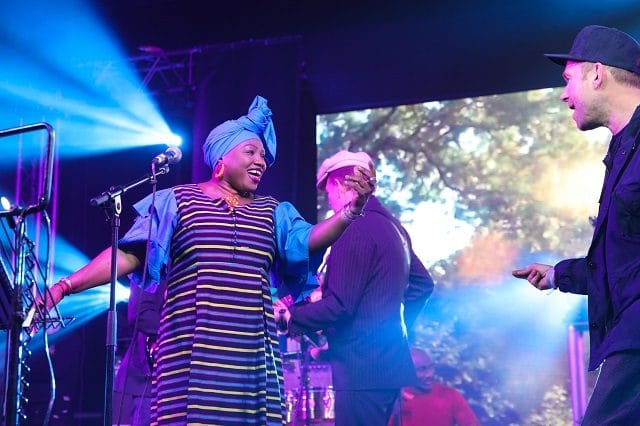 The Good, The Bad & The Queen and Kaladjula Band perform at Africa Express: The Circus as part of Waltham Forest London Borough of Culture 2019. Photo by Brendan Bell

Similar collaborations follow. Young Algerian guitar outfit Imarhan light a joyous blaze, further strengthening their credentials before they are joined by Lebanese singer Yasmine Hamdan and Dirty Three and Bad Seeds violinist Warren Ellis. Later Hamdan stays on for a dark, dramatic rendition of Ya Nass with Ellis which reminds us firstly that she should really be a bigger star than she is and secondly that Ellis is still one of the transfixing performers out there.

The high energy of Ghanaian/UK collective Onipa lift the midpoint of the show, ensuring the party is in full swing before South African singer Toya Delazy gives the first of several striking performances that elevates her to one of the stars of the show (Kaladjula band member Nainy Diabaté and Mounir Troudi are others to make similar claims).

Rokia Traoré appears for one stripped down song, confirming she has one of the best voices on display tonight while Wolf Alice frontwoman Elli Rowsell returns to excel on Up Early. Gruff Rhys is held back until the final stages but exerts a calm, composed presence on new track Johannesburg (which is revealed to have just been written the day before). 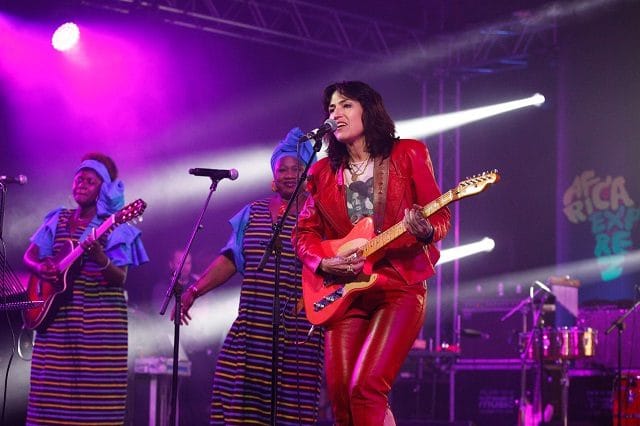 Kaladjula Band and Joan As Police Woman perform at Africa Express: The Circus as part of Waltham Forest London Borough of Culture 2019. Photo by Brendan Bell

Damon Albarn is a regular, smiling presence on stage for the whole show, whether contributing percussion or vocals, or just adding general enthusiasm and helping things flow so when he heads for the microphone towards the end the suspicion is that we might hear a solo track or maybe a reconvening of The Good, The Bad & The Queen. However, it’s far better than that. Next on stage comes Alex James, and then Graham Coxon and Dave Rowntree. In a thrillingly unexpected development Blur have materialised before our eyes. A sudden sensation of excitement ripples through the tent. When it calms down Albarn explains how they are going to play a song they last played in 1994 – Clover Over Dover from Parklife (a clever choice reflecting the Brexit-focused state of the UK). It sounds disarmingly delicate and beautiful, very much a Blur lost classic resurrected especially for tonight.

The London Community Gospel Choir and Rokia Traoré then join them for Tender which elicits mass singalongs from the crowd. “Love’s the greatest thing” resonates around the tent and it’s hard not to see it as a defining line for this Africa Express show. Albarn asks the crowd if they want one more and, upon receiving noisy affirmation, they launch into Song 2. The crowd suddenly becomes a haze of limbs. Amazingly there’s still time for Michael Kiwanuka to come on stage to play Black Man In A White World (amidst some confusion related to a recurrence of sound issues), the Kinshasa Sound System to provide harder-hitting sounds and Rokia Traoré to finish it all off with a celebratory, curfew-busting Zen.

The show may not have been completely perfect, and undoubtedly some parts worked better than others, but tonight offered a refreshing antidote to the negativity and disputes that have overtaken the UK in recent months. Albarn remains one of the most fervent believers in music’s power to unite, to inspire and ultimately to overcome. He should be applauded for helping events like tonight come to fruition. We’ve never needed them more.