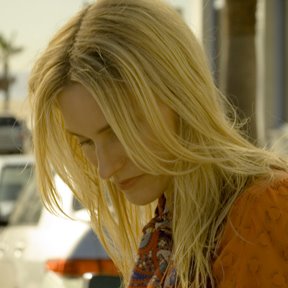 There are some things that you don’t expect from shows at the Royal Festival Hall. This is a building that’s one of London’s great buildings and demands respect from visitors and tourists alike. This is a proper cultural landmark in the nation’s capital. One of the things you definitely do not want to do is to throw up on the row in front of you. Alas, this is what one attendee managed to do, much to the shock of the people in the surrounding seats.

It would be fair to say that this isn’t the kind of thing that Aimee Mann is used to from her audiences. This is her first visit to London since 2008 and the enthusiastic, albeit erring on the side of irritating, heckling shows her presence has been missed. She returns in support of new album Charmer, a delightful and perky LP about characters with seductive personalities, for better or worse.

The first half of her 90-minute set is dominated by new material that manages to retain its vibrancy on stage. Gumby and Labrador are songs that, on the surface, feel quite simplistic in their construction, yet the hook remains firmly lodged in your head for a while after. Elsewhere, Ted Leo does a fine job of replicating James Mercer’s performance on the duet Living A Lie.

The highlight arrives in the middle of the set when Mann virtually silences the entire room with a trio of spellbinding tracks from her Oscar-nominated Magnolia soundtrack (which she jokingly mentions lost to Phil Collins in a faux-bitter manner). A solo rendition of Save Me is followed by the beautiful Wise Up, which allows her band to contribute some spine-tingling harmonies towards its conclusion. Her Harry Nillson cover, One, rounds off a captivating mid-section of the main set.

After this peak, the following half-an-hour or so never really scales those heights, though there are moments here and there that nearly regain that earlier magic. Both Lost In Space and Deathly are sublime slices of Mann’s past and, if that wasn’t enough, an apparently unrehearsed version of Ghost World got a surprise airing in the encore. For a song that they hadn’t properly practised – two keyboard players at opposite ends of the stage trying to work out how to play it as it goes along never fails to be funny – it sounded slick enough.

Based on one lengthy bit of stage banter, Mann has hinted that her future may well end up being stage-based; she talks about writing a musical based on concept album, The Forgotten Arm. Whilst it might be an indulgence that’s well deserved, it would be a shame for her to divert from making more albums. Whilst the overall feeling come 10pm is one of content rather than elation, it still remains satisfying to watch a songwriter who’s enjoyed a long and fruitful career still penning memorable songs with the promise of more to come.