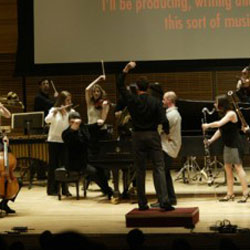 If Aphex Twin was the Pied Piper of electronic music, naughtily whisking away the nation’s lysergic adventurers to far off lands, then Alarm Will Sound are surely its Gepetto. They’ve managed to breathe new life into a genre of music born out of inanimate technological coldness by invoking ancient methods and practices, making it at once warm and historic.

This was the first time the New York 20-piece ensemble had played in the UK, as part of the Barbican’s Blaze festival. Seeing them all crammed onto the small stage of Wilton’s Hall was a sight in itself. What could easily have been dismissable as a one trick joke (achingly hip jazz nerds do a Mike Flowers Pops on uncommercial Intelligent Dance Music) became something utterly comfortable, even supernatural. They brought a new slant to a dated concept and added their own magic.

IDM, as it was awkwardly monikered, has long been considered forward thinking, but Alan Pierson’s ensemble managed to find its mythological precedents and influence within medieval choral pieces and ’60s experimental tape loops. The songs seemed at once familiar and timeless, with old-fashioned instrumentation giving way to fuzzy guitar riffs. Ading a visual element, plastic tubes were gleefully whizzed round the percussionists’ heads, serving to remind that the piece was actually created within the last decade.

Layers of strings, drums and vocals were perfectly synched to create walls of noise. They seem thrilled, yet unaware of the genuine skill they possess. They’ve taken a methodology usually reserved for a much older, sedate audience and adapted it to showcase how in-tune today’s composers are with the classics.

Tonight’s show was split into two sections to allow the various members a chance to re-assemble, switch instruments and breathe after each epic performance. Showcasing tracks by Autechre, The Beatles and their own keyboardist John Orfe, it was the covers that made the evening work. Anyone whose heard the original eight minute Beatles number Revolution 9 will attest that it’s a whimsical piece of slapstick that ultimately grates and tests the listener on vinyl. But live it teases, confuses and excites the performers. Even better were wonky rave anthems Meltphace 6 and show closer Four by the aforementioned Aphex Twin. A joyous cacophony of purposefully broken notes, stuttering voices and intrusive drumming echoed around the hall as they raced to a dizzy climax, ending a cohesive if exhausting triumph of an evening.

Alarm Will Sound MP3s or CDs

Alarm Will Sound on Spotify