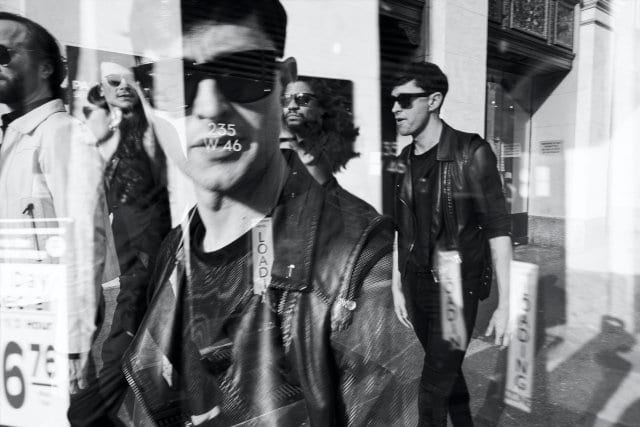 Tonight Algiers are in a combative and performative mood. Front man Franklin James Fisher, normally the focal point due to that voice, risks being overshadowed by his band mates, one of whom is dressed like Danny Zuko from beloved ’80s action flick The Karate Kid, throwing martial arts shapes and chopping the air between numbers. Each member of the group engages constantly with the crowd. Another band member is howling out on the saxophone. They’re having fun, it seems. They ignore hecklers, who scream for album highlight Dispossession, from the offset choosing to bide their time before going there.

Not afraid to use volume as a weapon, the band approaches noise the way it exploits freedom of speech. It becomes a hurricane, something to be celebrated, controlled and used against oppressors. Keyboards create punishing polyrhythms, vocal distortion is repeatedly used to resonant effect and guitars wrangle bodacious hair metal solos out of thin air. The track Void, closing number from their newest album There Is No Year, is the perfect entry point for tonight’s spectacle. It opens with a blazing electronic crackle before a wall of pummeling drums kick in and Fisher screams out about cryptology and opportunity. The vocals get lost in a squall of feedback. It could easily have come from California in the late ’70s, carrying with it the same urgency as those early Black Flag and Germs records.

Similarly Walk Like A Panther, with its samples of political mantras and electronic undercurrent, thumps with an immediate religious ferocity. But as much as one song sounds like Los Angeles hardcore, the next song might sound like Prince, alone at home on the piano, nursing a broken heart. They fluctuate between sentiments, instruments and moods, at times to disorientating effect. On Hour Of The Furnaces, they slow the tempo right down, yet still find space to yowl at the moon. Even in their quieter moments they have something to rail against. Each sentence feels pointed. Their grievances are personal.

At one point halfway through the proceedings, they break into the choral intro from Childish Gambino’s This Is America but, rather than covering the song in its entirety, they slowly mutate and destroy the refrain. The high point of the evening is Chaka, their disco inflected takedown of romantic entanglement. Its throbbing bass line and funky echo laced vocals give way to a gruelling saxophone solo that reverberates around the room, leaving jaws aghast and heads nodding in appreciation.

When they finally gift us with Dispossession, it’s impossible not to find musical familiarities with a certain New York alt rock group from the last couple of decades. In an interview with the website Afropunk three years ago, the members of Algiers lamented critics for comparing them to TV On The Radio. They carried on that grievance in the free jazz inspired spoken word single Can The Sub Bass Speak? lambasting folk for trying to pigeonhole them.

The problem is that they do sound similar on occasion, and it isn’t meant as a dig at this stage to compare one ensemble to the other. It’s not a matter of derision; rather it’s a way of finding artistic connections and entry points. It’s about civic engagement and finding your space in a rich lineage. Both groups are beloved for the way in which they spew identity politics onto molten punk rock with devotional gospel melodrama. It would be remiss not to draw parallels and find friendship in this disconnected world.