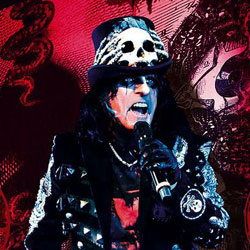 A lazy caricature of a 61-year-old would involve cardigans, twee hobbies and socks with sandals. But these are definitely out when it comes to original shocker Vincent Furnier. Instead, an evening spent with this man is far more likely to include fake blood, sundry gore, morbid camp drama and plenty of rock. After 40 years in the business, the man better known as Alice Cooper is here to unleash the London instalment of his Theatre of Death tour.

With the band kitted out in leather so tight one cow probably sufficed for all their needs, Cooper kicked off with guaranteed crowd pleaser School’s Out. Painted in the theatrical make-up that’s been his signature for the past four decades, he looks exactly the same as he did 20 years ago. And that’s never been, if we’re honest, exactly a picture of health. He looks his age.

But an epic two-hour set resplendent with straight-jackets, skull top hats, skeleton crutches and swords make the pertinent point that he’s not been around this long without good reason. With that gravelly voice he ploughs through hit after hit. I’m Eighteen? Check. Poison? Check. Even some more recent hits such as Along Came A Spider are thrown in.

When he says Theatre of Death he certainly means it; one stage death is not enough. Instead he is killed and resurrected no fewer than four times. He is killed by guillotine, gallows, iron maiden and, for the apt introduction to Poison, by lethal injection, administered by the token rock ‘n’ roll scantily clad nurse.

Disappointingly, the finale is another round of School’s Out, which is always is always a bit of a let down, as it was when Iggy Pop toured with The Stooges in 2007 and felt it necessary to repeat I Wanna Be Your Dog. But uttering words of disappointment in this crowd, a sea of black-clad, eyeliner-streaked, die-hard fans would likely result in further expirations.

Despite that repetition, it is pretty spectacular show. There are lights and inflatables that, whilst adding to the event, are reminiscent of your average teeny-pop show. But this thought is soon banished as Cooper draws a sword and proceeds to slash them with as much venom as an old rocker can muster. Word has it that he’s found God, yet Alice Cooper shows no signs of growing old gracefully.