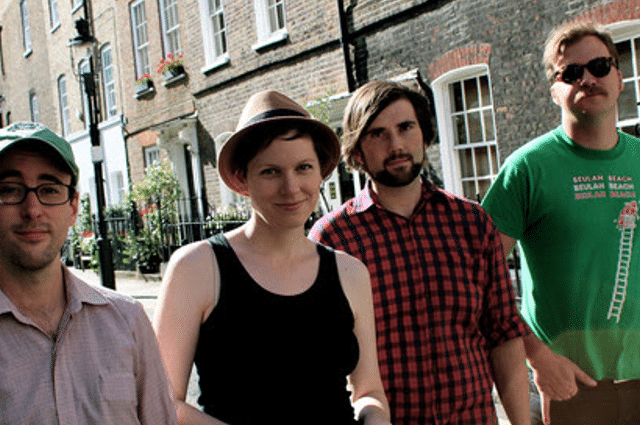 A precursory glance at the running order for the Manchester date of Allo Darlin’s current tour reads like a who’s who of bands making irresistible pop music that’s as intelligent as it is melodic and accessible, with the headliners on this occasion being joined by Sheffield’s current ambassadors of perky vignettes Standard Fare, and The Wedding Present-via-Edwyn Collins rambunctiousness of Leeds noiseniks This Many Boyfriends.

By the time Standard Fare take to the stage the ever-wonderful Deaf Institute is already more full for an early doors opener than it has been for some headline slots. Despite their expressive lyrics, Standard Fare themselves have always eschewed unnecessary theatrics, showiness and general timewasting; the Ramones school of stagecraft, if you will. Dividing their stage time between their two full length releases they clatter relentlessly through the likes of 051107, Older Women and Philadelphia with an effortless nonchalance, bookended sonically by Emma Kupa’s rumbling basslines and soaring vocals.

Effortless nonchalance is not a description that you can use to describe This Many Boyfriends as they hit the ground running after a five month layoff. Always seeming like a band fighting against the constraints of a studio, they remain at their best live. Led by the diminutive dynamo of Richard Brooke they power with staggering gusto through moments spanning their entire fledgling back catalogue from early EP tracks such as Diaries and #1, recent singles Young Lovers Go Pop! And Starling through to forthcoming tracks Sometimes and Tina Weymouth, of which fellow Yorkshireman David Gedge would approve.

Enter Anglo-Aussie headliners Allo Darlin’. To date they remain one of Britain’s most reliably enjoyable live acts (though present them with this and they’ll look at you in disbelief), and their Manchester show demonstrates just why. It’s difficult to find a band that takes as much joy from performing as this quartet, as evidenced by joyous renditions of standalone single Darren and first album slow burner Let’s Go Swimming. Tracks from forthcoming album Europe, such as the titular track and Neil Armstrong, point to it being a special record. Factor in a mesmerising Go-Betweens cover and the band transcend their indie pop tag.

Twenty four hours later and a quick trip over the Pennines see the compact confines of the Deaf Institute replaced by the lived-in charms of the larger Queen’s Social Club in Sheffield. A tragic set of circumstances mean This Many Boyfriends are unable to play, but Standard Fare and Allo Darlin’ are instead joined by The Passing Fancy, who show emphatically that, contrary to what snarky articles in broadsheets may lead you to believe, there is more to Wakefield than rhubarb, the Hepworth gallery and social deprivation. Theirs is a particular style of time-warp pop, treading the right side of that very fine line between charm and pastiche with a fine ear for killer hooks and melodies that live with you for days.

Hometown heroes Standard Fare replicate the assured performance of the previous evening, throwing in the likes of Dancing and Wow off the first record and an incendiary Crystal Palatial off their latest endeavour alongside the aforementioned Manchester highlights. The city’s love for their beacons of pop sensibility is evident by the mass singalongs from a varied crowd, and compared to the relatively subdued clientele at the Deaf Institute there already seems to be something of a Friday feeling amongst those present, fuelled as it is by Standard Fare’s driving, harmonious stylings.

The venue’s gone into full-on party mode come Allo Darlin’s emergence, with favourites such as Polaroid, Silver Dollars and Kiss Your Lips resulting in a sea of flailing limbs and ‘head back, eyes closed’ bellowings. The new material, whilst unknown, continues to go down well with Wonderland’s soaring final chorus being a highlight for many. Throw in a propulsive cover of Scottish miserablists The Just Joans‘ If You Don’t Pull and you’re left with a set that leaves the crowd wandering around afterwards speechless, dazed, and sporting enormous grins.

What the two nights have proved is twofold. Firstly, that pop’s class of 2010 remain a fantastic live spectacle, and judging by the audience reaction (especially in Sheffield), a welcome change from the pious, ‘stand at the back with your arms folded’ culture found in other corners of the musical spectrum. Secondly – and this is shared by the promoters – the likes of Standard Fare, This Many Boyfriends and Allo Darlin’ have fast outgrown the 200-capacity venues they have traditionally played, with the Deaf Institute just about coping on this occasion. 2012 could realistically be the last year to catch them in such an environment, and based on the two nights in question it’d be foolhardy to miss out.