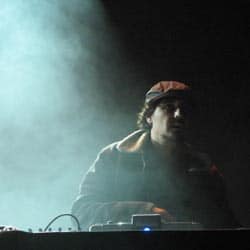 Extravagant audiovisual shows seem to have very quickly become the rule rather than the exception. The previous six months alone have seen ambitious AV shows from artists such as the Glastonbury-wowing Chemical Brothers, Eric Prydz with his aptly named EPIC, Richie Hawtin and his envelope pushing Plastikman show and DJ Yoda, who teamed up with a full marching band to back up his humourous scratch-video performances. One show that created a buzz and then fulfilled, if not exceeded, the hype was Amon Tobin’s ISAM.

Inspired by the album of the same name, Tobin’s sell-out appearance at the Roundhouse genuinely broke new ground and set the bar high for his contemporaries. Unsurprisingly, tonight’s return to London – which sees Tobin arrive in something more resembling all-encompassing spaceship than a stage – is also a sell-out.

The mood within North London’s HMV Forum is gradually raised to one of tense anticipation by various atmospheric sounds, until the curtain is pulled back to reveal Tobin’s giant polyhedron. Looking like a Dali-esque polystyrene skyline from a city in the far future, the white structure is soon awash with shapes and colours.

Every sound is synchronised perfectly with visual elements including smoke and fire, geometric shapes, constellations of stars, computer generated machinery and fireworks that fall to the ground in time with huge bass drops that judder from head to toe. At one point the structure seems to close, revealing a spaceship that then blasts off into the distance. The only criticism is that the visuals seem to be slightly off centre in relation to the structure but this does little to temper the enjoyment of what unfolds.

And what of the music? Well, as anyone familiar with the ISAM album will already know, Amon Tobin’s instruments that he has constructed purely out of found sounds and field recordings combine to make compositions that are at times challenging and obscure but still manage to retain enough melody, form and structure to engage.

Played through a huge sound system, Tobin’s work truly comes to life in full cinematic glory as all of the seemingly disparate elements are glued together both sonically and visually. The Brazilian composer sits within a pod at the heart of the structure that surrounds him; most of the time out of view behind the flashes in front of him, but on various occasions finding himself exposed by shards of light that show him nodding away in front of his hardware.

Like the Wizard of Oz, he seems small in comparison to the show that he is triggering and creating around him. At one point the pod is illuminated to show Tobin playing Kitty Cat, the closest thing to a song on the ISAM album, by touching a screen in front of him. This is translated to a giant pixelated black and white live image of his head and hands, projected onto the 3D structure as Tobin seems to simultaneously touch the structure, creating huge ripples of waveforms as he does so.

The rave-style finale to the main set is carried on into the encore as a more dancefloor-oriented selection of jungle and dubstep – albeit with no regard for either of the genres’ rules and formulas – gets sections of the crowd dancing properly, probably for the first of the night. Many still choose just to stare at what’s happening in front of them as the 3D structure seemingly fragments and re-forms in front of them, only spurred into life when Tobin jumps down from his pod to absorb their rapturous applause and whooping.

ISAM must be seen to be believed. The show is a dazzling, full-on assault on the senses that leaves the audience with an extreme version of that post-cinema altered state, and it takes time to readjust back to the real world. AV technology is bound to advance further so that more extravagant and impressive shows than this are possible but, for now, Tobin and his tech cohorts at V-Squared and Leviathan are way ahead of the game.