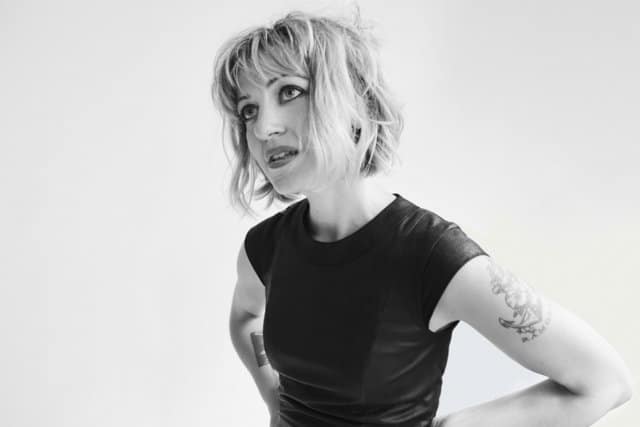 This superb double performance will remain memorable for many more reasons than its coinciding with the UK leaving the European Union. Now a much more high profile artist following the success of her musical theatre production of Hadestown, Anaïs Mitchell is at last commanding bigger audiences, although the more intimate nature of the Roundhouse’s almost-but-not-quite in the round series of concerts is fortunately still empathetic to the nuances of her sound. A number of the cast and crew of Hadestown are in the audience for this show, and the night feels celebratory, perhaps even quietly triumphant.

The first set comes from Mitchell’s current project, Bonny Light Horseman – something of a supergroup with Eric D Johnson of Fruit Bats on lead vocals and Josh Kaufman (who has worked with Craig Finn and Josh Ritter) on guitar. They are supported with considerable subtlety and depth by a supple rhythm section with a compellingly soft touch – excellent drummer JT Bates and bassist Michael Libramento. There is a poised and beautiful balance between Mitchell’s acoustic fingerpicking and Kaufman’s thoughtful and expansive colours and spindly lead lines. Bates creates a range of sound worlds by playing with sticks, brushes, soft mallets and his hands.

Whilst this performance undoubtedly feels more interactive than the album, it also retains the music’s absorbing delicacy and poignancy. From the deft and authoritative take on Blackwaterside that opens this short set, to the transcendent close vocal harmonies of Bright Morning Stars (a title that seems to somehow capture exactly how their music sounds), the band offer a thrilling and distinctive take on this music, exploring an impressive range of textures and dynamics.

If Mitchell mostly plays supporting vocalist to Johnson’s lead here, it’s because the band return to accompany Mitchell for her outstanding headline set, and some of the Bonny Light Horseman that highlight her vocals are saved for this (The Roving is particularly gleaming). The presence of the band also enables Mitchell to focus mostly on the more fleshed out and elaborate moments of her catalogue, drawing liberally from the outstanding Hadestown and Young Man In America albums. If Mitchell’s striking and distinctive voice, rich in character and feeling, is what first leaps out from her recordings, live performance makes clear that she is also an excellent guitarist, well capable of conjuring different moods from her instrument. Relaxed, warm and performing with a sense of freedom, Mitchell has a warm and natural rapport with the audience, even performing a rapturous Cosmic American solo on request.

Opening the show with Ships, the rolling, hypnotic, incrementally powerful track that closed Young Man In America, it’s immediately clear that this is song craft at its best. The complementary support provided by the band breathes life into detailed and intricate arrangements, the performances always leaving space for small moments of individuality and improvisation. Songs from Hadestown (including Wedding Song and the beautiful All I’ve Ever Known) sound freshly inspired and enhanced. Perhaps best of all is the sensitive treatment of Shepherd (from Young Man In America), a song developed from a story written by Mitchell’s father. It’s a glorious folk ballad that blends tradition with contemporary arrangement.

Wilderland and Young Man In America are segued together as on the album, in a performance that blends narrative and heart with flashes of turbulence and tension. By way of contrast, the solo Now You Know, with its musing on family, intimacy, life cycles and dying, is refreshingly emotional and touching, perhaps more so given that Mitchell is seven months pregnant.

The best is perhaps saved until last, with a biting and exuberant version of Why We Build The Wall, which comes with a searing guitar solo from Kaufman that pushes the whole ensemble to a higher level and stirs the audience into applause. Mitchell and the band receive deserved standing ovations and encore with 10,000 Miles from the Bonny Light Horseman album, appropriately emphasising the fruits of their collective endeavour. It’s good to be reminded of what collaboration can achieve, on a night mostly celebrating withdrawal and isolation.