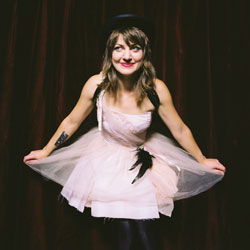 Anaïs Mitchell’s Hadestown was one of last year’s most ambitious and beautiful albums, a “folk opera” based on the myth of Orpheus and Eurydice, transposed to the age of the Depression and dustbowl blues. Originating as a theatre piece staged in Mitchell’s home stateof Vermont, the music references Bertolt Brecht, Tom Waits and even traditional Afghan music, exquisitely arranged by Michael Chorney. The album also features an outstanding cast of guestvocalists, including Justin Vernon (aka Bon Iver) as Orpheus, Ani DiFranco as Persephone and Greg Brown – with his extraordinary mineshaft of a voice – as Hades.

Tonight’s concert performance – one of only two in the UK – was undoubtedly a special event, and the crowd was bubbling with asense of occasion enhanced by Union Chapel’s ceremonial atmosphere. The show required, however, a little expectation management: the guestspots were to be taken by various British folk singers, several of whom had never performed the material before. The results weresometimes glorious, sometimes downright disappointing.

Mitchell herself (singing Eurydice) was a captivating presence and confident ringmaster: her solo song Flowers was stunning, lump-in-the-throat stuff. By contrast, her cast of singers all exhibited various degrees of shakiness and nerves, not quite knowing what to do with their hands in the absence of a guitar, not quite committing to their characterisations. The show’s lack of polish was understandable, as were the decisions to perform it without staging and using local singers from the world of folk rather than, say, musical theatre. But the lack of drama in the performances (and in Jackie Leven‘s narration) represented a real missed opportunity.

Thea Gilmore – vocally, at times, a dead ringer for DiFranco – caught the knowing, sexy complexity of Persephone: her Our Lady Of The Underground was a highlight, complete with a scorching muted trombone solo from Paul Taylor. Her Hades was Martin Carthy, the biggest name on the bill, but also the night’s big disappointment. He barely knew the tunes and, in a blue Hawaiian shirt, got nowhere near the brooding menace of Hadestown’s “mean old boss”. Jim Moray as Orpheus had the toughest job of the lot, following Justin Vernon’s multi-tracked splendour and playing the greatest singer inhistory to boot. Despite his fidgety physicality, Moray warmed up into the role and his performance of If It’s True was impassioned and affecting.

Nuala Kennedy, Wallis Bird and Sharon Lewis were excellent as The Fates – serving as Greek chorus, infernal minions and backing singers. Special mention must go to Bird, who not only did a fine job as the solo support act, but was also the only guest singer to seem totally immersed in Mitchell’s songs. And what songs: the lyrics combine narrative clarity with fiendishly clever touches of wordplay; Chorney’s arrangements have a poise and sparseness that allows the material plenty of breathing room, and were faithfully recreated by Chorney’s well-drilled six-piece band of guitar plus drums, double bass, cello, viola and trombone.

The “reverse elegy” of I Raise My Cup To Him closed the story to a rapturous ovation before the band and singers returned for an unplugged singalong of Way Down Hadestown. Though the encore left the audience with a sense of the warmth and community at the heart of Mitchell’s project, it was nonetheless hard to shake the feeling that this often delightful evening could – should – have been an extraordinary one. Let’s hope this isn’t the last London hears of Hadestown.