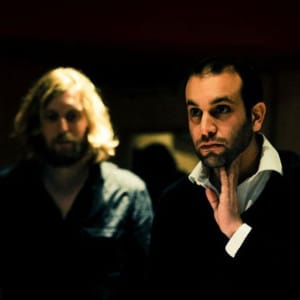 The Union Chapel is nothing short of glorious: a Grade I listed gothic revivalist masterpiece in which the audience congregate upon pews in the huge well of the church or high on the first floor balcony, looking down upon the stage with its vast ornate pulpit, decorated for the season with an enormous Christmas tree and a lavish sprinkling of twinkly lights.

And as if some bright soul had decided to crystallise the very essence of Christmas, the stage is set up for three nights to accommodate the Metropolitan Orchestra, providing a live score to The Snowman and the Snowdog, last year’s sequel to the much-loved original Raymond Briggs animated classic from 30 years ago.

The orchestra files on in very proper black tie, bar one violinist in a red Christmas onesie, setting the tone perfectly. Conductor Andy Brown introduces the two men responsible for the score, film composer Ilan Eshkeri and Andy Burrows, the latter of We Are Scientists and Razorlight, who take their places with the keyboards and guitars to the side of the grown up musicians, all beneath a large white screen which flickers to life as the orchestra begin to play.

A love letter to the original The Snowman, The Snowman and The Snowdog is a beautifully animated silent movie, a study of a young boy revelling in the magic of the snow, while the orchestra illustrate each flurry of precipitation, each breathless exertion involved in collecting and sculpting the cold, crunchy building materials and each comedy flourish: a sock chosen for a snowdog’s ear; a tumble from a speeding sledge.

As in the original film, the lush orchestral score keeps the pace and nudges the narrative along without words… Until the boy and the snowman (and snowdog) take flight – a snow-dusted city and sparkling countryside from the air scene during which Burrows sings Light The Night, an altogether warmer, more inviting modern incarnation of Walking In The Air, which deserves to be no less iconic.

Each scene is so emotively framed by the score that a Lapland sledge race has everyone clapping and stomping along, before only short minutes later, gentle plaintive notes illustrate melting snow and the surreptitious wiping of a fair few eyes.

But before the sadness can settle and the magic can fade, the credits roll and the orchestra breaks into the sledge race stompalong once more, the strings section (featuring onesie lady) positively bouncing in their seats.

After an interval, the orchestra return, resplendent in their finery, followed by Burrows and four of his friends, a less polished, rather more hirsute bunch, who stand nervously at the front of the stage. As the audience settle down, the five men fidget a little, before easing tentatively into an a cappella version of White Christmas. Their confidence grows immediately, and by the time the strings join them at the end of the first verse, their voices soar way way up into the rafters, filling the church with Christmas cheer.

After this, the hirsute band return to their instruments and join the orchestra for a singalong of Christmas staples – Simply Having A Wonderful Christmas Time, Step Into Christmas and much else besides – before Burrows begins to introduce the next segment of the evening.

“A couple of years ago, I did a record with Tom Smith from Editors,” he said. “I was walking around the street when someone shouted out of a car window at me about what an amazing record we’d made. That was James, so we’re now going to sing a few of those Smith and Burrows songs with James Corden.”

For followers of Burrows’ Twitter feed, this was apparently expected, but for everyone else in the audience, the appearance of James Corden in a rat pack suit to sing a few numbers was a bit of a surprise – as was the revelation that he has a pretty good voice, which he comfortably showed off on This Ain’t New Jersey and When The Thames Froze from Funny Looking Angels, the Smith and Burrows Christmas-themed album from a couple of years ago.

“Tonight we’re Smithy and Burrows”, Cordon announces, in reference to his character from Gavin and Stacey.

“Who lives in London?” Burrows asked. “Because you could have such a bigger house if you didn’t live in London, but nights like tonight remind you why you do – because they’re not doing this event in St Albans.”