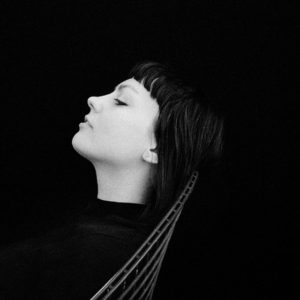 There’s a palpable sense sense of excited anticipation reverberating around Camden’s KOKO as the audience shuffle into position for Angel Olsen’s headline slot. Her latest record My Woman is no doubt a major factor in the buzz. The 29-year-old’s music has been warmly received since her 2012 debut Halfway Home. Her growing reputation was further established with the full band follow up Burn Your Fire for No Witness. But it was this year’s effort that really had critics reaching for superlatives.

Olsen and band take to the stage to a more than warm reception, when some misguided soul decides a wolf whistle is the appropriate welcome – bad move, fella. There is no dramatic chastising, just a deliberate pause and a scathing look. Job done. It could be, in all likeliness, imagined but the opening few tracks feel mildly combative as a result, which merely adds some extra zing to proceedings. The set opens with the gloriously heartsore Never Be Mine, and Olsen’s hugely expressive voice needs little warming up as her vocal fills every nook and cranny of the venerable old theatre.

Shut Up Kiss Me is as thrilling as you might expect, despite Olsen’s fairly fixed physical performance. You might imagine the song is fairly strenuous to perform, but her voice is so effortless that the track’s immediacy doesn’t require a frantic performance from her. For the most part keyboardist and backing vocalist Heather McEntire offers the majority of the dance moves for the evening, and she looks like she’s having the time of her life. Olsen has assembled a very fine band around her, who also look the part dressed as they are this evening, both male and female, in androgynous grey suits.

Although the set plays heavily in favour of My Woman she does include a number of cuts from her previous records. A luminous rendition of Forgiven/Forgotten rates highly, as does the rich oddness of Acrobat from her debut. Despite her flair for energetic numbers Olsen is not afraid to spend time with the more down tempo numbers. And her performance of Sister and Those Were The Days are fine examples of why it is just as well she is a performer that is capable of beautifully fashioned restraint. And it’s a restraint that is just part of her powerful stage presence that really aerates her already excellent body of work.

The set ends with the vibrant and celebratory blast of Give It Up, leaving both the band and the audience fully charged, and it would have been a more that satisfying way to conclude the gig. Thankfully the age old tradition of encores lives on, for to miss the final two tracks would have been more than a shame. Olsen already has a wealth of great songs that she could have saved up for last, and on this evening she certainly chose well. First up is delicious lullaby-like Intern which resounds around the room hypnotically and magically. Finally, Woman is even more of a revelation live than it is on record. Underpinned by Emily Elhaj’s balmy yet requisite bass line the rest of the band, and not least Olsen, are free to soar.

It’s an intensely elegant end to the performance, and closes an evening that justifies the praise heaped on this fine artist. Angel Olsen has proven herself a performer of grit and graceful poise.