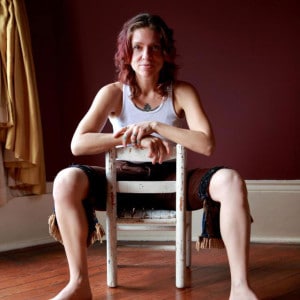 Ani DiFranco has released 17 albums in something like as many years, with innumerable tours between them. There’s scarcely been a pause for breath or reflection. That all changed with the release of this year’s Retrospective, a record some artists would have named Greatest Hits. But despite a devoted and slightly cultish audience buying anything she can release, Ani DiFranco doesn’t really do “hits”, great or otherwise.

Instead, down the years she has cultivated a public personality of two sides. On the one hand is the USA’s most successful independent female musician, a super-savvy, uncompromising business head with her own record label and her own people installed in every aspect of her business. On the other hand she’s a ditzy little hippie girl playing her little folk tunes to anyone who’ll listen. The real Ani is probably a mix of the two.

In support of Retrospective, tonight we witness an Ani who seems more content and confident than ever with her work, her life and her place in her fans’ affections, but one who is also happy to give her fans what they want. Gone is the hunt sab look of dredlocks and piercings, to be replaced by flowing blonde, sunkissed locks. Gone is the vaguely travelleresque clothing to be replaced by workaday garments that might have originated from any high street. Gone is the political firebranding, replaced with a gentle approach to the world and its peoples. She seems a little less totemic, a little more human.

Done Wrong from Dilate gets the set underway and she eyeballs the audience, comprised largely of competition winners and media. Looking around at Bush Hall’s oft-remarked-upon opulent fixtures and fittings, she remarks that she likes the smallness. Usually her visits to London find her in the Shepherd’s Bush Empire or the Forum – this evening’s intimate setting is, for her fans, quite a treat.

As to what brought about this new chilled-out Ani we see before us, she’s happy to enlighten. Recalling the aftermath of Hurricane Katrina, which ripped through New Orleans, where she now lives, she notes that people there were still able to write happy music. That being so, she says, she needs to quit complaining. Whether complaining or not, she communicates with her audience brilliantly, the natural star whose stage presence holds interest throughout with a warm-heartedness that can hardly fail to appeal.

Fuel and a mesmerisingly passionate and stripped back delivery of Napoleon follow in short order before her rhythm section takes a break. Solo acoustic, the energy levels sag a little, but her infectious grins save her. Even when singing heart-wrenching lyrics she never seems sad. The zone of contentment extends to a new song written about giving birth – she recently became a mother.

She ends with Shameless, another track from what still seems to be her outright most consistent album, Dilate. With so much material to choose from, she could have played for several hours longer. But, as she’d said earlier, she’s liking things small these days.