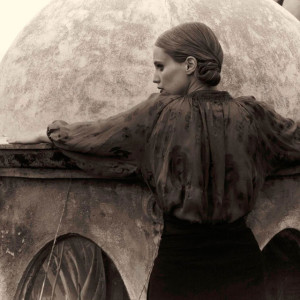 The lights are dimmed on a packed Queen Elizabeth Hall, the audience sheltering after a sweltering Saturday in London. Twelve figures dressed in long white robes enter the auditorium, first silently, then quietly intoning the introduction to Sing To Me as Anna Calvi walks on to join them in darkness.

Fourteen songs and 80 or so minutes later, they leave the stage for the final time to a standing ovation, following an elysian The Bridge, where their see-sawing voices mimic the swaying structure to which Calvi vows to “hold on and on”. What happens in between is the kind of unique experience to which the Southbank’s artist-curated Meltdown festival seems best to be suited.

When touring in support of her 2010 Mercury-nominated début, the singer and guitarist was joined only by her drummer and a harmonium-wielding multi-instrumentalist, the dark grandeur of the tunes given heft by her powerful voice. But Calvi’s live sound has recently been expanded hugely by a number of performances alongside the Heritage Orchestra, a modern ensemble whose eclectic outlook has seen them work with the likes of Björk and Sparks.

This tour last reached London at July’s Citadel festival and, while there were some beautiful arrangements, unfortunately anything at a level even slightly below ‘bluster’ was rather swept away over a dust-blown Victoria Park. It’s all the more reason, then, to be glad to witness the striking combination on show tonight, with the berobed choir, commissioned in collaboration with the Orchestra, pitched against synthesisers that complement the harmonium’s haunting drone. The choir is utilised brilliantly during Blackout, on a frosty, claustrophobic take on Bruce Springsteen’s Fire and particularly on Suddenly, somehow romantically recalling old Hollywood.

Similarly cinematic, the instrumental Rider To The Sea has a more restrained role for the choir, leaving plenty of space for her guitar work. Here, and at numerous other points tonight, she demonstrates perfectly her complete control over the instrument, contrasting precise, nimble sweeps – she came to the guitar after studying the violin – with wiry, driven discord, used to nerve-jangling effect on Love Won’t Be Leaving and a version of Suicide’s Ghost Rider: as she prowls the stage she pushes a metal slide up over the pickups of her Telecaster, obviously revelling in the glorious, squalling racket.

Ghost Rider was included on Anna’s 2014 covers EP Strange Weather, recorded in part with David Byrne, the director of this year’s festival. And sure enough, when a second microphone is brought onstage after a bluesy No More Words, it’s Byrne that strolls on, clad all in white, to perform the EP’s title track, originally by Keren Ann. The duet is one of the highlights of the set and Byrne’s very appearance elicits gleeful yelps from the audience: even Calvi allows herself a slight grin as she thanks him at the end. His singular vocal tones help to add different shades to a performance whose rare moments of colour are otherwise provided by the bloody glow of the lights during a sultry, teasing Suzanne And I and the flamenco flourish of Jezebel.

The audience here are in no doubt that Calvi is a star and, to date, she has certainly shown herself to be an exceptional instrumentalist, a bold and creative collaborator and a deft reader of a diverse range of material. If she can continue to allow such welcome moments of illumination to break through all the magnificent gloom there’s every reason to believe that she’ll shine just as brightly for some time yet.