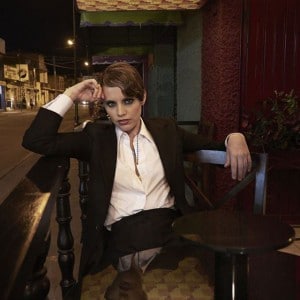 Presence is a funny thing. Some people can swing through the room naked on a steel ball licking a hammer and generate little more than a bored sigh. Whereas some people just stand there and completely capture your attention.

Anna Calvi belongs in the latter category, from the moment she appears on stage tonight. And she really does just appear – one minute there’s just the dilapidated elegance of the Wilton’s stage, framed with fairy lights and elaborate cornicing, and then, there she is. A half-smile, a slightly shy nod, before being handed a guitar and allowing proceedings to proceed.

Then things get dramatic. When Calvi sings, at least. When she doesn’t, she has this low-key humbleness which seems to magnify the drama of the performance. It’s a bit like hanging around midgets to make yourself feel taller. Rolling with the creationists to make you feel smarter.

Calvi does drama very, very well. Swooping, impassioned, dynamically shifting drama that goes from conspiratorial whisper to ear bending cry. It goes for the smattering of songs we get from her self-titled debut and for – actually probably more so – those from her new album, One Breath.

This is the first time they been played live, Calvi informs us, and the first impressions are very good. Suddenly drips with quiet longing, while Piece By Piece is gorgeous; mostly quite skeletal, but occasionally bursting into squalling guitar embellishments. Cry is similar; a creeping thrust of a bassline, a beat which shimmies and shakes and Calvi wrenching notes from her instrument with desperate passion.

Where the debut always felt studied and controlled, albeit with huge undercurrents of torment, there’s dirt under the fingernails of these new songs. Which is wholeheartedly a good thing. A parallel can be drawn with the venue itself: the fact that the paint is flaking and cracks can be seen in the walls make it all the more likeable and all the more believable than if it were flawless.

Still, it’s also hard to ignore the sheer intensity of some of the older material. Desire ends with a round of applause that goes on for long enough for Calvi to start looking around in embarrassed fashion and her closing cover of Edith Piaf‘s Jezebel breathlessly gallops to the finish, unsurprisingly devoid of regrets.

Then Calvi thanks us softly, takes her bow and departs with the same lack of fuss with which she arrived. There’s nothing more than needs to be said, nothing more than needs to be done, although, to be fair, it would have been a bit incongruous had she impaled the speaker with her guitar and crowd surfed her way to the bar. But presence doesn’t need gimmicks. Presence speaks for itself.