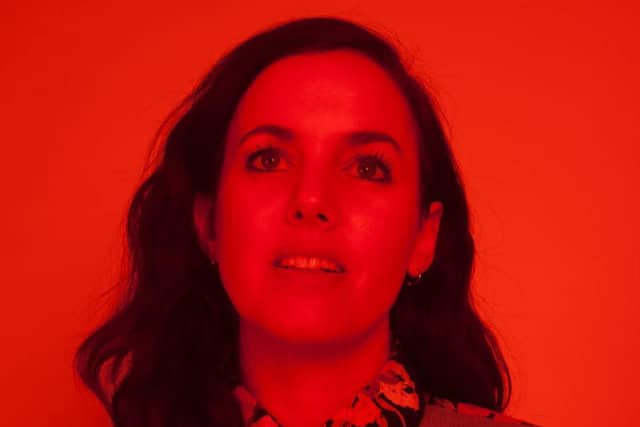 Five years have passed since Anna Meredith’s astonishing, exhilarating Nautilus first surfaced, and nearly two since the release of her debut album on which it features. Varmints went on to appear in assorted Albums Of The Year lists and be awarded Scottish Album Of The Year. The time elapsed does not suggest a slow worker; her many and varied projects, commissions and a tour that has taken in Europe and North America have brought her music to ever wider audiences, and just this week her music has soundtracked an ice resurfacing machine’s travails at London’s Somerset House ice rink (the piece is called Sarabande for Zamboni). All of which is fitting for a composer whose works had already included variously a Last Night of the Proms commission, an opera, a collaboration with Shlomo, music for sleep pods in Japan, and soundtracks for lifts at Manchester’s Arndale Centre.

Tonight, at her biggest London headline show to date in Hackney’s Oval Space, the band that has been with her since before Varmints first broke cover are again present and correct. Featuring quite the hotch-potch of instrumentation, it brings together cello, guitar, drums, Meredith on programming and clarinet, and – now firmly a fan favourite – tuba. The dynamics of this unusual assemblage have led to Meredith’s unique sound – dramatic brassy horns are interlaced with thrilling arpeggiated synth lines, and time signatures arrive, change and disappear. This show not only sports the addition of visuals – unfortunately obscured by a raised drumkit and unhelpful lighting – but bacofoil outfits, not least Meredith’s tailored-for-the-occasion silver cape, as well as something called a Konami dance mat, of which more later.

It begins in blue light, with the silver costumes contriving to give the impression of aliens landing. The first three songs are cuts from Varmints. Taken follows an introductory chat during which Meredith says she doesn’t know if we can see them all, “but we all look fucking amazing”. Which is true. They don’t sound fucking amazing, however; both the tuba and clarinet are inaudible, and still are during the otherwise glorious rumpus of Nautilus, alas, as sound men engage in frantic on-stage activity throughout and afterwards, leaving Meredith to fill a lengthy gap with entreaties concerning merchandise, and a plug for their next London gig, on 28th April next year.

But the set soon regains its course. Manipulated organ sounds duet with cello, guitar lasers across drums and sonic connections come, twist, shimmy and go, with Meredith shifting between vocals, clarinet and twiddling and pressing an array of buttons and keys. A new track, quiet and about a ghost, brings the energetic set further texture, and for good measure it’s followed by a track which builds and builds through out-of-step snare whacks before revealing its colours as a full-on rave, eventually dropping out as it reaches a finale performed only by harmonising voices. Exhilarating barely covers it. And then the Konami dance mat is set down centre stage. Drummer Sam emerges from behind his kit and gets on down, waving arms, hopping from one leg to the other, crouching, jumping, making all the mat’s noises in quick succession. These get incorporated into a song, because of course they do. Such hi-NRG antics require a sedate follow-up, and a Blade Runner-esque bass-led track happens dutifully along. It in turn gives way to Dowager, with Sam taking the lead vocals.

As is becoming something of a tradition for Meredith’s gigs, the encore is a cover. At her last London gig she put her spin on The Proclaimers‘ 500 Miles. This time, as the first few notes from the guitar testify, Metallica’s Enter Sandman is up for her particular treatment – mixed just a little with the soundtrack theme from The Bill. Classically trained Meredith will have no music snobbery here, as she underlines her popular appeal and mastery of all sonics she surveys, with the audience delightedly hollering along. And with the tuba at last properly in the mix, an epic end is a formality.

If it never quite reached the assailing power of her 2016 Margate Roller Disco set, when the tuba reverberated around the room like a call to war, and if the visuals were largely inconsequential given the raised drum kit, there was no doubting the talent overflowing from the stage. The new material intrigues, sounding like a development of the tried-and-tested set-up Meredith has built. Will she bring some new ingredients into the sound mix with her new album? Time will tell. But 28th April 2018 is already in the diary.