by Bekki Bemrose
published: 1 May 2018 in Live Music Reviews
Tweet 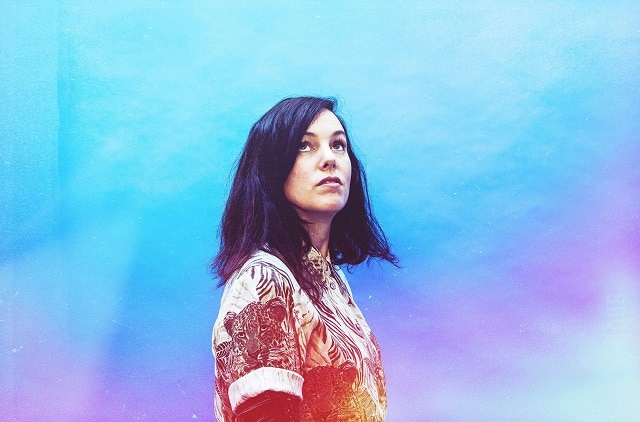 Early in the evening, Anna Meredith makes a quip about not spilling beer on the fancy seats in the newly refurbished Queen Elizabeth Hall. Joking aside, the fear is real. The room reeks of newness, and the lack of wear brings to mind the kind of feeling evoked when you visit a fantastically neat aunt who makes you take your shoes off and has covers on everything. Still, that tension is soon alleviated when the first few honks of Nautilus ring out from the stage, making it clear that this will be a performance that is entirely immersive and distracting, freshly upholstered seating be damned.

Every detail knits together in service of the vibe. For a start, the visuals are brilliant, starry, and by turns surreal and apt. As the Southbank Sinfonia, Meredith’s band, and conductor Simon Dobson emerge in silver costumes you can but marvel at the wonder and ridiculousness of it all, while pondering who deserves the prize for best outfit: Dobson’s disco ball bomber vs. Meredith’s cape (yup, that’s right, a bloody awesome silver cape). All in all, these extraneous details perfectly compliment the performance’s assumed aim: to send the songs from her debut album Varmints stratospheric.

Billed as a marriage of acoustic and electronic instrumentation, with new arrangements, and presented like some mad trippy space opera, there doesn’t feel like a more apt celebration of Meredith’s achievements with Varmints, released fully two years ago. And the premise delivers in spades. Unsurprisingly, the more bombastic tracks feel as pumped as a bodybuilder overdosing on protein supplements. With everybody on stage playing like demons, you’ve a job to stay in your seat, as the brutality of R-Type becomes grander, and the foreboding power of Nautilus swells.

Equally, the more straightforward poppy tracks like Something Helpful soar just as much as the big builders rightly benefit from the beef of a sinfonia, proving that disco dazzle is as exhilarating as their pomp. It’s also wonderful to hear a fuller string section on Scrimshaw lending its sublimely moving rises and falls an enhanced power, and even more of a treat to hear the live debut of the gorgeously mournful Blackfriars, which adds a not unwelcome contemplative moment.

Further treats are doled out in the form of two new tracks, along with the promise of a forthcoming follow up to Varmints. Even on first listen, both tracks sound superb, achieving exactly what they should do by lending a bubble of excitement for what comes next. But overall tonight belongs to Varmints, and album/live highlight The Vapours proves its worth yet again as an ear-to-ear-grinning show pinnacle.

This performance underscores the innate potency of the songs, as well as revealing what a feat her regular band have previously achieved live with such a modest arsenal. From muddy festival fields to grand spaces, Anna Meredith’s Varmints is what joy sounds like. Yet again, she has pulled off a performance that was bewildering, and quite brilliant.