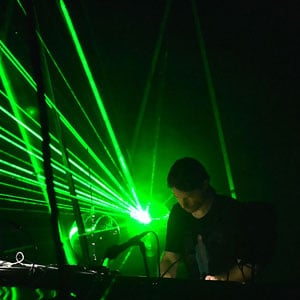 If a gig has its audience questioning the impact of atonality within music even half way through, then it is surely doing something right. And yet that was only a fraction of the story with Aphex Twin, who left us scratching our heads in wonderment at the vision of an oscillating piano, music for glitterballs and a remote controlled orchestra. The only regret was that this and the Ether Festival on the South Bank were not somehow intertwined, for the two would have made a perfect match.

It was the orchestra first – the Heritage Orchestra, with their own wordless choir, who immediately flouted convention by filing on to the Barbican stage and taking their seats facing away from the audience. The object of their attention was not Aphex Twin (Richard James) himself, though his shadowy figure could just be made out in the gloomy distance, but a screen, onto which was projected a graphic equaliser from which they would work. There were eight dynamic settings for them to follow – from ‘off’ through ‘pp’ and ‘mf’ to ‘fff’. The pitches were less easy to determine, though each player was wearing headphones, through which they were presumably receiving audio signals, and we were helpfully shown close-up live footage of the orchestra as they responded to their conductor’s demands, all issued through remote control.

The spectacle was something to behold, though the music was a little more derivative. Operating in tight pitch centres it contained fiercely intense statements, but with textures clustered closely together a lot of the time there was little room for manoeuvre. The voices of Penderecki and Xenakis could be heard in the orchestration and the amplified sound meant that a genuine quietness (pp) proved difficult for the players to achieve. The uncut piece had an improvised feel and was superbly performed, reaching several fff apexes but barely losing its intensity over the half hour duration.

Interesting though it was, the piece could have been regarded as a little indulgent in the wrong company. Yet nothing prepared us for what followed the interval, a meditation on Steve Reich‘s Pendulum Music, where a grand piano, controlled by James from afar, swung like a pendulum over the smoke filled stage. Its music was in direct contrast to that of the orchestra and choir, forsaking atonality for a pure C major that washed all cares clean away, reminding his audience that Aphex Twin is a master of undiluted ambience in music. Complementing it was the music of the swinging mechanism itself, for it generated a hypnotic and strangely calming meter, taking away the fact the swinging piano initially resembled the creepy rocking chair from The Woman In Black.

The following take on Pendulum Music was more energetic but retained an ambience in its movement, using as it did a galaxy of lasers. A series of 12 glitterballs were set in oscillating motion, but they were close to microphones, so James was able to pick up the resultant sound and process it. The resultant colours matched the green lasers that danced tantalisingly out of reach, the music itself alighting on tonal centres but not fully settling anywhere – again in direct response to the motion of the balls. It was like having an army of clarinet players instructed to play softly and sonorously on a cloud, the lack of weight completely in opposite to the fraught first half.

The questions surfaced at the end – works of genius, or indulgent attempts to make a name for himself? Happily the latter could be firmly ruled out, for the way James left the stage, coat in hand as if leaving the sonic building site on which he had been working for the day, showed an apparent modesty and endearing shyness. All of which left us with the former, for Aphex Twin, on this evidence, appears to be operating several years ahead of most of his audience. Even diehard fans weren’t sure what to think – but they were nonetheless open mouthed at his sheer daring and invention.