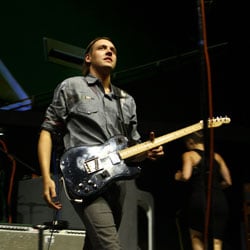 Arcade Fire’s imminent, sprawling 16-track third album The Suburbs (it even has two tracks with the word “Sprawl” in their titles) is eagerly awaited – not only by the Montreal based band’s legions of fans and celebrity admirers.

Having made epic, unforgettable anthems out of childhood memories and deaths with Funeral, one of the most lauded debut albums in the history of humankind, their follow-up and major label debut Neon Bible didn’t quite match what were, for the most part, ridiculous expectations. The burning question now is, which album was the blip and which represents the eight-piece’s real level? In short, is their new material good enough to catapult them to mainstream stardom this time round?

Despite their time out of the spotlight, this intimate showcase at the venerable Hackney Empire hits all the right spots and demonstrates that Arcade Fire have lost neither their ability to stir nor their thirst for performance. Yet where Neon Bible and its supporting shows painted an undeniably impressive though almost unremittingly apocalyptic picture that lacked the romance and uniqueness of their debut, tonight there’s a palpable sense of enjoyment emanating from the stage; whether it’s serious-faced front man Win Butler quipping about the England football team, or a tambourine being somersaulted, or the band’s unsung hero Rgine Chassagne’s beaming smile directed at her bandmates.

They take to the stage beneath a screen that cuts moody live images with video footage, and launch into two new tracks, Ready To Start and Modern Man; uncluttered numbersthat might’ve been designed to be remembered. As statements of intent they readily signpost the way to venues far larger than this one, to radio airplay and places where records still sell. What’s more, not only are the songs up to scratch but the sound showing them off is just about perfect.

But this was not to be a straightforward showcase of new material; spliced amongst it was the best of the old too, including something like three quarters of Funeral and, tellingly, very little of Neon Bible. It was a set which, much like their most intoxicating work, began slowly and intensified to a thrilling conclusion. Neighborhood #3 (Power Out) and Rebellion (Lies) remain the two songs most likely to whip an Arcade Fire crowd to a frenzy; running them one into the other without so much as a pause upped the ante still further, and adding in new number Month Of May directly after underlined the band’s confidence in their new material.

Butler even fancied his chances at a spot of crowdsurfing, complete with mic stand; willing hands carried him aloft as Chassagne ably held the fort, flitting from drums to piano, picking up an accordion, singing and generally mucking in. As Wake Up closed an ecstatically received encore, Butler ambled off stage left… only to return lookingsheepish as he remembered the exit was on the opposite side. As an outfit they’re still tight, but they no longer seem quite as uptight.

Showcase gigs ahead of album releases can be leaden when the audience isn’t yet up on the new material, but this event just about perfectly balanced the new with the familiar. And if Neon Bible was a mis-step – a contestable point in any case – then a band capable of an album as engaging as Funeral is surely allowed to make one. Thrillingly for them and everyone eager for their return, Arcade Fire are back, and this time on course for world domination.