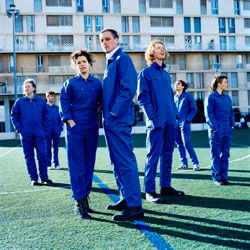 Hyde Park, and the queue for the toilets stretches back into mist, through a swamp of urine and a patchwork of discarded food wrappers and paper cups that would send Wall-E on a killing spree. On it snakes, into the shadow of the corporate grandstand and the glare of vendors’ signage before, finally, coming to rest under a speaker stack from which Mumford & Sons’ Awake My Soul churns forth, a call for spirituality in a landscape of the damned. This is possibly the day’s lowest point.

Or maybe that comes later, when Arcade Fire take the stage after a nice series of trailers for a bygone suburban dream, and it quickly becomes apparent that it’s not going to be possible to hear them, Ready To Start lost within the combined shrieking, hollering, yelling and general conversation of much of the crowd. From a spot roughly 50 metres from the stage, only around five of the people nearby are actually focused on the band: evidently mobile calls, endless generic photographs of friends drinking wine or throwing cups at people’s heads, aggressive male posturing and, in a real highlight, casually burning cigarette holes into the jacket of the girl in front are more pressing activities. When was it, exactly, that Arcade Fire inherited Oasis’ crowd?

None of this is the band’s fault, of course. Theirs is an exemplary performance, full of passion, energy, drive and conviction, but it’s difficult to appreciate this whilst having your offensively-priced drink knocked out of your hand for the third time or having to contend with the group in front loudly and repeatedly exclaiming how bored they are, before yelling at people nearby for not dancing enough. Perhaps the more committed fans had opted for the live web-stream instead, quietly focusing on the subtleties of the performance through headphones whilst leaving the £60 ticket fee for those who view live music as little more than a distraction, an accessory to their inebriation and very vocal socialising.

It’s all the more frustrating because the setlist is so damned good: 90 minutes of sustained highpoints clearly aimed at a summer’s eve, with little of the more funereal tone adopted by Neon Bible. Indeed, as with most of this tour Arcade Fire largely neglect their sophomore album, with just No Cars Go, Intervention and Keep The Car Running getting an airing within the 18-song set, compared to an equal seven from Funeral and The Suburbs respectively.

But this isn’t the setting for sombre introspection, as the sunset streaks across the sky and the crowd echo and amplify every whoop and woah that Arcade Fire throw out. Ahead of the gig Win Butler promised “a night of rock and roll”, and that’s what we got, the band poised and assured, with none of the awkwardness present within previous shows. Butler himself finally seems comfortable with his frontman role, his banter easy but his stage presence commanding: musically they’re still very much a collective, but visually he’s the focal point, and a willing one at that.

In new song Speaking In Tongues we even get, in Butler’s words, a power ballad, although not – despite the presence of Owen Pallett – a particularly memorable one. But in a set this crowded with audience-pleasers, with arms-aloft choruses and muscular riffs, there’s little space for new material, nor for subtlety or quiet pause: we’re a long way from when the band played in churches, carrying their instruments through the crowd to close the set on the steps outside.

But hey, that’s what stages this size are for. And in the encore Arcade Fire make it clear why they deserve to be here, Neighborhood #1 and Sprawl II grabbing the audience’s full attention at last, the latter closing the show in a way that almost makes the earlier complaints redundant. But not quite. “See you in two years,” says Butler as the band heads to the shadows, and you have to hope it’s somewhere else.