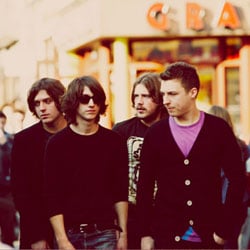 Some gigs are genuinely special. The conspicuous absence of touts thronging Brixton Road was a clue. So, too, was the desperate and deeply unethical bidding war on Gumtree (150 for one ticket? I hope you lost an ankle in the moshpit).

The name of the support band, Them Crooked Vultures, probably didn’t mean much to most of the crowd. The palpable gasp of surprise and glee as Josh Homme and Dave Grohl strolled onstage was just reward for those who’d arrived early.

Homme and Grohl are two of the most recognisable men in rock and the affection felt for them powered the band through a set of mostly new, enormous atmospheric rock sprinkled with some epic noodling. The supergroup is beefed out further by Led Zeppelin‘s John Paul Jones and joined by guitarist Alain Johannes.

Queens Of The Stone Age frontman Homme was dramatically bigger than everyone – and everything – on stage. This soulful metal giant belted the new songs like Gunman and Caligula, while Grohl’s violently visceral drumming had pockets of the crowd bugging in disbelief and breaking into grinning, awed expressions.

Homme introduced Daffodils, a dark and slightly sleazy paean to the yellow flowers, dedicated to our headliners, whose third album, Humbug, he co-produced. At their mention the crowd erupt, but it seems extraordinary to think this aural onslaught is merely a warm-up. How are the Sheffield scamps going to follow this up?

With a huge lighting rig erected by a stage-full of clambering lampies for a start, followed by the most nonchalant of entrances, sliding straight into My Propellor, opener for the new album.

That lighting rig swirls the air into purple haze around the moody, expansive composure of the new song, with Crying Lightning soon after.

A brooding cover of Nick Cave‘s Red Right Hand builds on the intense atmospherics as the stage is bathed in blood-red light and spotlights shoot in all directions like a prison break.

The band barely move, scattered sparsely across the stage, expressions completely unseen below curtains of hair. When Alex Turner dryly announces they have time to play one more after the second song, the joke is almost lost amongst the surprise that he can speak.

Brianstorm, immediately followed by I Bet You Look Good On The Dancefloor, get the most rapturous reception of the evening, with “show me the Jacuzzi” from the former proving an arms-in-the-air moment.

Pretty Visitors and Dangerous Animals from Humbug sound great, with a maturity and menace that Homme no doubt encouraged. Matt Helders’ drumming style is a world away from Grohl’s full-body thrashing, but he has a menacing power of his own; he took up boxing to up his drumming ability and it starkly, scarily, shows. The more muted reactions to these songs must, in part, be attributed to the brief two days available for the fans to absorb the new material.

However, there is disappointment that the erstwhile scamps are embracing a more expansive sound: one man shouts “play the first album!” throughout (more ankle-injury wishes from me) and it is obvious that the chirpier, cheekier songs inspire the most love from this ‘Arctic Monkeys mailing list only’, thank-you-to-the-fans-gig audience.

But both versions make the band: loveable scamps and brooding songsmiths. Each is inherent to who they are. 505 closes the show, a mixture of the two; kitchen sink storytelling and sober, wistful musicianship. Turner leaves the stage before the song finishes. No histrionics or flourishes. Whatever people think of their music, it is that alone they have to judge upon.