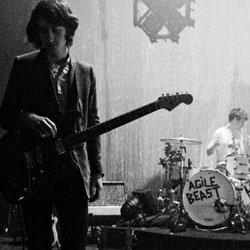 The Arctic Monkeys are that rarity: an indie rock band that has managed to stay true to its roots, while building a big commercial following. After the infectious, breathless rush of their first two albums, with their cheeky tales of messy urban nights out, the more experimental, US-influenced Humbug proclaimed a new maturity, even if it was not so instantly appealing. And this year’s universally acclaimed Suck It And See combines the best elements of exuberantly catchy hooks, with classic rock roundedness.

About two-thirds of the way through their world tour, the Monkeys are supported on the UK leg by The Vaccines, who themselves have been performing live constantly since the release of their debut album at the beginning of the year. What Did You Expect From The Vaccines? was a defiantly titled, pre-emptive response to critics sharpening their knives for the inevitable backlash against such an over-hyped band – supposedly the ‘next big thing’ or, to coin that over-used trendy term, ‘game-changer’.

Now used more to headlining than playing second fiddle, The Vaccines do a great job in warming up the crowd for the main act. Wearing dashing short red jackets, singer Justin Young et al. know how to play an arena – even a forbidding aerodrome like the O2 – delivering a fast-paced half-hour set. They perform almost all of the tracks from their likeable, if unexceptional surf punk album, with the addition of lacklustre new single Tiger Blood.

Everyone from the surrounding bars surges in for the entrance of Sheffield’s sharpest export since steel knives ceased being manufactured in the city. Even after this long on the road they are in top form, playing 21 songs divided more or less equally between their four albums except, interestingly, for Humbug, which gets only three. Moving swiftly between early favourites like I Bet You Look Good On The Dancefloor and the frenetic Brianstorm, to the more recent psychedelic swagger of Crying Lightning and faux menace of Don’t Sit Down ‘Cause I’ve Moved Your Chair, the Monkeys know how to hold an audience, alternating full-throttle propulsion with teasing mid-song pauses.

Front man Alex Turner delivers an impressive vocal performance, but drummer Matt Helders gets a big cheer for singing the raunchy blues number Brick By Brick. After sing-along When The Sun Goes Down, the band leave for a short break before returning for three encores. New single Suck It And See is followed by a stripped-own, acoustic version of Mardy Bum. Turner then pays a tribute to former Radio 1 DJ and all-round do-gooder, Jimmy Saville, with, “Rest in peace. I don’t know if this was his work, but I think tonight he fixed one more thing for us – put your hands together for Miles Kane,” and that cues the fellow Shadow Puppet to join the band on stage for final song, 505.

Throughout the gig Turner refers to the O2 as Millennium Dome, presumably not a quaint twentieth-century anachronism but a resistance to increasing corporate naming of music venues. He’s not above orchestrating shouting contests between those seated on opposite sides of the auditorium, though it’s done with a sense of irony. And when he self-consciously combs his Elvis-style quiff, the crowd wolf whistles. A fair amount of laddish beer throwing and fag lighting goes on, but the atmosphere is relaxed in what is a pretty mixed audience.

It’s great to see how the Monkeys have continued to develop musically from one album to the next, breathing fresh life into the old rock format of two guitars, bass and drums, while Turner expands his lyrical interests with pithily humorous observations. When they finally finish this massive tour in February they will have won many new fans as well as satisfying existing ones. The band seem to be in for the long haul, as the real deal – or, if you will, a game-changer.