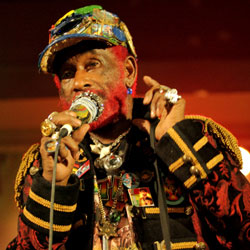 And so Springtime will never quite be the same again for a certainkind of music fan. The announcement that this would be the final ATPFestival to take place in May “for the foreseeable future” hasdisappointed a fair few of the festival’s ardent supporters. Thegeneral feeling is that if this is to be the last of the festivals toenjoy reasonable weather, then it should bow out with a bang (from nowon it’ll be December weekends only).

With no Pavillion Stage this time around, it’s not long before theweekend takes on a woozy zig-zagging motif as the audience pours backand forth between the festival’s 2 main stages. The journey has tostart somewhere of course, and so it’s down to Highlife to kickthings off. Rather than the bang that’s perhaps required, Highlife’s(or Doug Shaw to his mum) muted songs are mysterious andoccasionally cavernous. As the audience slowly starts to swell, so hissongs begin to take hold. It’s not unlike being welcomed to Twin Peaksby Bob.

If Highlife was a muted introduction to the festival, then BlackDice are in no doubt about which way to take the mood. Utterlyaggressive from the first note to the last their mashed up take on theSuicide blueprint is a breath of stagnant, but oddlyexhilarating air. At times the noise they make is unbearable theshuddering bass frequencies thunder through the bones with terrifyingmenace as the band soundtracks catastrophic technological meltdown onstage. Today, they’re simply unstoppable.

After the sweet diversion of Dent May‘s charmingly lo-fisongs, that somehow bridge the gap between Beach Boys andThe Smiths, it’s up to Lee Scratch Perry to step forwardand stake a claim as one of the acts of the weekend. A bonefide legendin every sense of the word, it’s a pleasure to see the man himself runthrough a terrifically tight set with his Upsetters. He leads theCentre Stage a merry dance right from the first note, pacing back andforth like a panther and hitting his notes with ease. It’s not bad fora pensioner; particularly one with a bright red beard, a giganticmagnifying glass hanging from his neck and more buttons on his outfitthan the average pearly king.

If Scratch Perry sets the audience up for a party, then it’s BigBoi who’s bought the booze and the good times. Hip Hop tends to goover perfectly at ATP (De La Soul in particular are a dab handat getting the party started here), and Big Boi is no exception.Masterfully working the crowd into frenzy, he’s simply on firetonight. His set concludes with just about every woman in the venue onthe stage dancing with him. Clearly he’s doing something right.

Minimalist composer Terry Riley inspires an entirelydifferent form of devotion. This is hardly surprising, Riley is afterall one of the most significant and influential figures incontemporary classical music. As Riley takes to the stage and sitsdown to his grand piano, a young man in the front row pukes on thefloor and is chastised and encouraged to leave the venue by thosearound him. Rather than give the river of puke a wide berth, theaudience merely marches through it in order to get a clearer view.What follows is an impressive set of minimalist treasures, but not onethat any rational person would stand in a puddle of vomit for.

Floating in a pool (of water admittedly) is worth the effort whereWet Sounds is concerned. Two events are scheduled at theswimming pool over the weekend, and it promises to be a uniquelistening experience. With different experimental loops being playedabove and below the water, what transpires is an immersive world ofsound where the music itself is directionless it appears in thecentre of your mind seemingly bypassing the need for ears. When itworks. Saturday’s event was something of a damp squib, Sunday’sversion however hit the mark perfectly with one writer of this parishdescribing the sound collages as other worldly and revelatory.