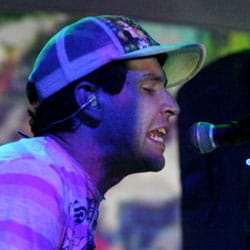 Comedy has never been a strong fixture on the ATP schedules, soit’s up to Mike Baetz to prove previous curators wrong.Instantly hampered by the presence of two children in the audience,Baetz appears to change his set and approach instantly. He self edits,and gets lost within his own material. It makes for an entertaininghour (if only for the Dungeon Master joke) as his rapport with theaudience and non-inflammatory material just about keeps the laughsrolling in.

The role of comedy in music has long been debated, and two of theweekend’s acts might do well to reconsider their stance. TheBrothers Unconnected‘s set is initially a mild and fairlyinteresting trawl though country-inflected guitar work outs. For somereason at the mid-point they start throwing in gags about cot-deathand putting on fake Asian accents. Some can see the joke, others justwalk out. Similarly,

The Frogs are an acquired taste theirstream of consciousness folk rock songs are at times spectacularlyoffensive. A waltz through their It’s Only Right And Natural album isno exception, finding a rabidly appreciative audience at the front ofthe stage and everyone else outside moaning about them.

Saturday evening provides a rich seam of quality. MeatPuppets put in one of the performances of the weekend as they runthrough their classic album Up On The Sun, an amalgam ofMinutemen treble guitars and country-infused chords, it isutterly sublime. In a similar vein is Kurt Vile‘s grungeexplosion later in the evening it’s like watching Dinosaur Jrrutting with My Bloody Valentine and is over far tooquickly.

Ariel Pink’s Haunted Graffiti meanwhile splits opinion withtheir bizarre rock/’80s pop hybrid. Ariel himself appears agitated andwired, twitching through the set like a disco Kurt Cobain.There are moments that they sound like genius incarnate, and otherswhere the ghost of Jan Hammer is all too close for comfort.

Equally peculiar is Beach House, whose subtle edges are allbut lost under the weight of their songs. For some reason they appearabrasive and oppressive as they make their way through their set,Victoria Legrand’s vocals are crushed under the weight of the music,as hidden from the audience as her face which is carefully curtainedbehind a shield of hair.

Animal Collective conclude Saturday’s festivities with a setthat is at times utterly frustrating and at others irresistible. Theirsongs drip with self-indulgence at times but when they develop intofull on organic jams they induce a trance-like state and succeed inencouraging the entire room to dance, wrestle and generally lose theirminds. By the end it can only be surmised that they’ve just about gotit right.

Sunday begins promisingly with the amazing guitar work of GroupDoueh and the repetitive rhythms of Orthrelm. However witha frankly bizarre set from Tony Conrad and JenniferWalshe (stuttering, gibberish and discordant violins) and anall-too-predictable-it’s-not-even-a-clich-anymore no show fromZomby the final May ATP threatens to fall at the final hurdle.Step forward Ear Pwr, whose “Indie stomp by Nintendo” set is amuch needed burst of energy. Micachu And The Shapes are on formtoo, their ramshackle pop songs cut through any pretenceperfectly.

On the centre stage Atlas Sound‘s Bradford Cox receives abirthday cake during his frankly stunning set (it is his birthday andnot some kind of weird art statement). The candles providing the onlylight on stage, as the nuances of the performance and Cox’s skill arelost in the darkness around him.

Finishing the weekend in style are Gang Gang Dance andAnimal Collective once again. None-more-cool Gang Gang Danceare horrifically loud, but also curiously hypnotic. Chaotic rhythmsand electronic soundscapes drive the audience into a frenzy. At thecentre of the band is Lizzi Bougatsos resplendent in a leathercatsuit. Her voice may be an acquired taste, but it’s something tograb onto in the sea of confusion the band creates. By the close, theaudience is ecstatic and there are dancers hanging from the speakerswaving flags. This is the bang ATP needed.

Animal Collective wrap things up with another trance inducing set,but after a weekend of excess, they struggle to enthral the audienceas completely this time around.

The final May ATP might not have been a stone cold classic, butthere were enough moments over the course of the weekend to remindthose present why it’s such a well loved festival and likely to bemissed by many next May.