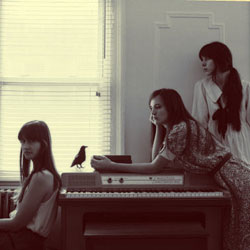 Nobody at tonight’s sold out Au Revoir Simone gig is too bothered with support act Silver Columns, even when Johnny Lynch haplessly bounds around the front of the stage and Adem carries a small drum kit above his head and starts playing in the middle of the crowd.

They’re just eager to see how the American dream-pop headlining trio will cope with their biggest headline show to date. Things don’t get off to the greatest of starts. Annie, who is pregnant, tells us she’s feeling hormonal and seems to take it out on a mic stand which refuses to behave, whilst the lovely Take Me As I Am is aborted after a loud burst of feedback ruins the soft-focus hue the band effortlessly create.

With their somewhat minimal approach to performance – they stand at the front of the stage, next to each other, each with a keyboard and a mic – and their distinctive, very American approach to stage banter (“You guys, this is totally awesome, etc”), there’s much to find mildly irritating about them. Luckily, any shortcomings in terms of stage craft are erased as soon as their voices start to harmonise and those strangely eerie keyboard parts begin to work in tandem.

Focusing on material from their second album, Still Night, Still Light, they rattle through highlights Another Likely Story, Shadows and Knight Of Wands in no time, the latter featuring some fairly maniacal playing from a visibly frustrated Annie. Fan favourite Sad Song (from their debut, The Bird Of Music) is also given an airing, its mix of sweet melodies with a slightly unsettling undercurrent reflective of so much of their back catalogue.

In fact, if there is a criticism to be made, it’s that some of the songs do blur into one and it’s almost a relief when the studied cool is removed for a closing cover of Don Henley‘s Boys Of Summer. Finally looking relaxed, the three young women seem to be having fun and in return the crowd get more involved, shouting back the lyrics. Clearly nervous and beset by early technical problems, the band leave the stage to rapturous applause having turned what looked like a bit of a disaster into a stylish victory.