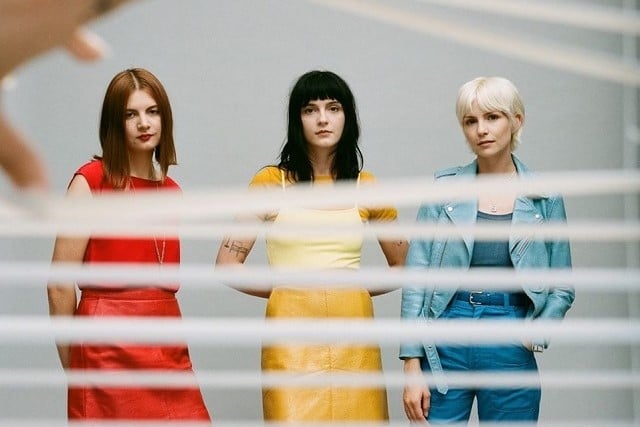 Opening with Highway, the girls in Automatic are going to take us on a ride, and whilst it may not be the craziest, and it may not reach its destination very quickly, it will be revelatory in its own unique way. The Los Angeles based girl group, who tonight are playing the UK for the first time, have dispensed with those noisy troublesome guitars, instead focusing on waves of synth and bass. Lyrics, where required, are simplistic and intoned dryly. The beats on the first couple of numbers sound like those early Human League singles. Modest, distant and deceptively mechanical in tone, they come courtesy of drummer Lola Dompé. She won’t brag about it, but she’s actually the descendent of rock royalty you know, what with her dad, Kevin Haskins, being the drummer from Bauhaus no less. Not that you’d know. There are no theatrics, no grand guignol, just the smallest amount of smidge of camp, courtesy of singer and keyboardist Izzy Glaudini’s sparkly ensemble.

Struggling with issues with their monitors, it takes a while to rev the engine but by the time they get to their third track, Electrocution they finally find their rather sedate groove. You hope with a title like that, it will froth and flicker but it’s a faultlessly pleasant electro new wave listen.  It chugs along in a deadpan manner, and then it’s over and we clap. Staying in their lane, they follow it with Champagne and you can hear the influence of the B-52’s but it all sounds a bit muffled. There’s too much reliance on the instruments to carry the content. It’s great that they can afford to make use of vintage keyboards, like their heroes, but the joy in listening to tracks like Dance This Mess Around and Give Me Back My Man, was the cod hysteria. Kate and Cindy knew that simply emulating or covering a musical genre wasn’t enough, you have to play with it, to respond urgently.

On tracks like Humanoid they take a detached approach to songwriting, whereby rather than playing up the weirdness of it’s science fiction content they choose to voice the emotionless machine rather than the crazy inventor. What they need to do is let themselves go a bit, to go off road. Glaudini and pals have a chance to do so, with their cover of the post punk classic Mind Your Own Business by Delta 5. It’s the first part of the evening where they seem to be having fun. Even though their version slightly removes some of the rage of the original, it still pours some much-needed fire in their tank. Filled with odd electronic scratches and sneering attitude, it enervates them for the remainder of their set. With Signal, the titular track from their debut album last year, Automatic have easily one of the best singles of the last decade. It’s a spiritual sister to Sneaks’ catchy Tough Luck from a couple of years back, with the same clipped drum beat and slip sliding bass line, courtesy of Halle Saxon.

They end with Suicide In Texas, which literally sounds like that band stranded in that locale. Overflowing with heat and the echoes you’d associate with wide-open spaces, it swirls and thrums in all the right directions. The lyrics are filled with wanderlust and dread, and it feels like they’re about to throw away the map. Eager to explore the road ahead, we all eagerly hitch a ride off into the darkness.