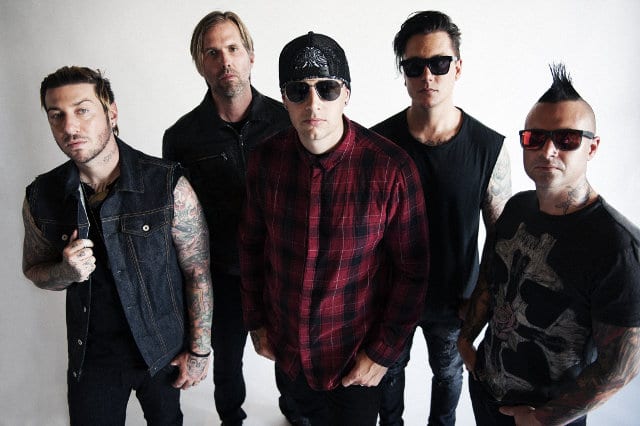 Heavy riffs, awesome vocal ability and spectacular theatrics; on the day that millions of women marched in protest against the king of farce, another kind of drama unfolds at London’s O2 Arena.

Swedish melo-death metal legends In Flames kick things off with a way too short but nonetheless excellent set mixing old school heavy classics such as Cloud Connected and Leeches with newer, more melodic material such as The Truth from latest album Battles. Crushing song after song with immense power, they set the bar high and the only thing missing is more time with these metal giants who in this opening slot merely skim the surface of their two decades long repertoire.

Still, Anders Fridén, whose voice and energy is on top form, manages to deliver pep talks to aspiring rock stars and joke about stealing riffs from UK bands. And it is with a sense of humour that he time and time asks the still-trickling-in audience to move: “When you’re home alone and no one is watching, I know you’re fucking dancing.” Sadly the audience seems to have little interest in doing so and an old fan might find the lack of audience enthusiasm a little hard to watch. That said, you could not complain about the quality of this live set, and Fridén and co seem pleased as they finish with the force of nature that is Take This Life.

Next up is Disturbed. With more fire and less growling, the Chicago quarter serves up a show of spectacular theatrics and this, this is what tonight’s audience has come for. Clad in a long black coat, David Drainman conducts the O2 Arena like the ring-master of doom that he is and the arena, now nearly full, laps it up as the party atmosphere sets in. Throughout their well-oiled set hits such as Stricken, Stupify and 10,000 Fists are performed to perfection and the ’00s nu-metal success is complete.

But that’s not all. After a short interlude, where big drums are brought out on stage, Drainman asks us to lift our phone lights, declaring “this is the moment you have been waiting for” and we are treated to their smash-hit remake of Simon and Garfunkel’s Sound Of Silence. The light trick is repeated for 2015’s soft rock song The Light, where “the members of Disturbed humbly request a moment of audience participation”. The effect is striking and, although probably unintentional, the lyrics “sometimes darkness can show you the light” seem extra poignant considering today’s marches. With lights swaying across the room this is pure goosebump-inducing metal ballad magic – topped only by the finishing tune; the one and only Down With The Sickness, at which point the arena reaches whole new levels of ecstasy. A very, very solid performance.

The drama is ramped up once more as headliners Avenged Sevenfold take to The Stage – the song and latest album title which has given name to the tour and also begins their set. From the very first strum of Zacky Vengenance’s guitar to the final note, the crowd is on their feet – and it is evident to see why; this is a show of epic proportions, backed up by great heavy metal talent.

Front man M Shadows wears his trademark sunglasses and a massive smile throughout the show and, being the great showman that he is, he powers through hit after hit with flawless vocal ability (aided but many a smooth water break – the guy is a pro after all), interacting with fans, who he refers to as family, with great ease. At one point there is a sing-off with a female fan that he recognises from the night before, at another he asks if the water a young male fan is drinking is vodka and he doesn’t forget to high five those placed on either side of the elaborate stage.

The band, known to be fans of spectacular visuals, has prepared a show complete with horror and space animations displaying across the nine (!) screens, one of which turns into a huge cube that sails out over the audience. As if that wasn’t enough, a ginormous astronaut appears for the latter part of the show, although why is somewhat unclear (we’re all wondering how they got it through customs).

Where previous acts had to ask the audience to take part, there is no need here. The belting sing-alongs, the circle pits, the bare-chested young men swinging their fists in the air; pure joy and euphoria comes naturally when the back catalogue include songs such as Afterlife, Hail To The King and Nightmare, where the opening bell sounds send shivers down the spine. “Oh that’s beautiful,” sys M, letting out a big sigh after yet another chorus from this sold out arena – and you couldn’t agree more.

A7X play songs from every one of their seven albums, and at one point drummer Brooks Wackerman (formerly of Bad Religion) breaks up the set with an incredible drum solo (watch it here) before the band plays God Damn off their latest album. The new stuff goes down well but it is the classics that sees the venue explode; it’s Saturday night and the party is on. One moment of sobriety, however, comes as M introduces Sunny Disposition, reminding us of “all the shitty things going on in the world”: “We don’t care what side you’re on but things are getting a little scary… so let’s dance,” he says, soon after bringing out a megaphone to egg the crowd on. It is clear that if he ran for president he’d have these votes assured.

They finish with the almost Bond-like Acid Rain, after which the astronaut is deflated (aha!) and the floating cube reined in, but the venue sounds with calls for more. “Sevenfold, Sevenfold” is answered with another three songs; Bat Country, A Little Piece Of Heaven (at which point late band member James Sullivan gets a mention: he was a “sick fuck” and the lyrics prove it) and lastly Unholy Confessions. As the crowd heads off into the night, no doubt to continue the party elsewhere, it wouldn’t be surprising to find out that many of them will have tickets for the Sunday night show too. Those that don’t already might be very tempted to get some. What a show.