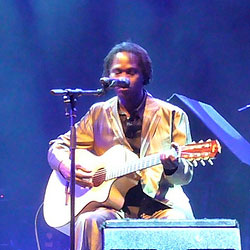 In the course of his set tonight Baaba Maal brought his audience to their feet again and again. It wasn’t just his brilliant live set that won over the all-seater crowd, but his warmth, humility and incredibly infectious joi de vivre.

With a career spanning more than two decades, the Dakar-born star mixes traditional Senegalese music with genres as diverse as salsa and folk, ragga and funk. His work has played a vital role in paving the way for many other African musicians, such as Afro Celt Sound System and Orchestra Baobab, and more recently he’s also been a pivotal figure in the Africa Express project.

It is fitting then that Maal is part of jazz pioneer Ornette Coleman‘s Meltdown, taking his place amongst a whole host of fellow trailblazers as he showcased new album Television. He strides to centre stage, the rest of the band catching up, his narrow frame wrapped in the shimmering gold of a woven silk suit – a bold sartorial statement.

The rest of the troupe, ostensibly all from different backgrounds, wore a mlange of traditional robes, alternative street wear and casual attire. If nothing else this is one of the most immediately obvious signs of Maal’s eclectic, diverse and wide ranging music tastes. Maal’s blind friend, long-time collaborator and griot Mansour Seck, was led on stage separately to applause. Finally the band, armed with a full artillery of percussion, guitars, bass and keyboards, began the evening’s revelry.

Maal’s rich, clear voice rang out to respectful silence from an eager audience. The eerie opener was mysterious and spiritual, but within minutes the set gathered pace and volume, shifting into a celebratory mood.

His message goes beyond his musical talents. He told of his homeland and the universal needs of children, asking the audience to enjoy themselves but to be aware of those less fortunate. Indeed, leading by example, his joy in performance was tangible, leading the dancing, crowd clapping and eventually venturing into the audience, where his energy seemed to spread like wildfire.

Playful and imaginative on stage Maal encouraged call-and-response from his band and spurred competition between drummers, turning the show into a giant jam session. It meant that Percussion Storm had more than a few moments to steal the show. And then the 55-year-old got on his hands and knees for some intense breakdancing moves.

There were opportunities too to collaborate with new artists. Special guests included up-and-coming songstress VV Brown; she provided a soulful (and the only female) touch to the proceedings for Djarabi. Additionally, a pair of young London based rappers made their contributions; although they were enthusiastic, their words were inaudible and their performance paid scant regard to the rhythms around them.

But the encore numbers were rapturously received and brought together disco beats and funky guitars to get the crowd dancing for a final time; a lasting and joyful sign-off from a charismatic and awesome entertainer.