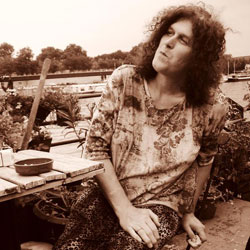 Baby Dee is more than a singer. She’s a performer, an artist and an enigma.

Performance art has been a massive part of Dee’s life. She was once a bilateral hermaphrodite circus performer at Coney Island, and she thrives under the spotlight, despite her coy and shy persona.

The Union Chapel in London’s Islington is the perfect venue for Dee, not only because it has an air of mystery itself, with its gothic wooden ceiling and looming stain-glass windows, but because it makes her mischievous.

“I like being bad in church,” she says with her hands in front of her mouth like a naughty schoolgirl. A bit of an understatement when she’s singing songs about Jesus beating her mum.

Dee dresses down for her show, choosing a strange, and very big, fluffy Dalmatian jumper, scarf, quarter-length trousers and massive boots. Her red, curly hair is stuck on top of her head in a matter-of-fact way, her grey roots indicating that she’s not the little girl she pretends to be.

Her look and style is messy, like her singing – it’s a sound you either love or hate, and one I haven’t made my mind up about yet. What was clear is that the chapel was full of adoring fans, hanging on her every word. When she starts to sing, Dee’s multiple personalities shine, from boomingly exaggerated pronunciation to whispering princess. It’s theatrical, but still personal and passionate.

But the magic of Dee’s performance is her talent for the piano, shown off in all its wonder in the spacious and echoing setting. It’s soft, beautiful and serene, even during a song about her father’s crowbar collection. Her playing flows like a classical pianist, but incorporates melodic elements from musical theatre and jazz and, although always technically spot-on, it changes depending on the tune or song.

As her band enters the stage – three baby-faced men on cello, drums and double bass – Dee plays a Christmas jig, all chipper and seasonal, but later she performs a song for a lost loved one and the piano, as well as the mood, takes a much darker tone.

The band adds to the beauty of Dee’s music. Although their own good looks might have been a reason for their employment, they are also very talented – soft, jazz drumming, bouncy and woody bass and gorgeous cello. They’re a real addition.

Dee’s harp playing, although not as technically perfect as her talents with piano, is also great. She really takes out her aggression on the strings and it’s a wonder it’s still in tune, especially as “only sissies tune their harps,” as she tells the audience.

Even if that voice is not your favourite, the playing, the band, the stories and the personality make for a great show. And it is a show rather than just a gig.