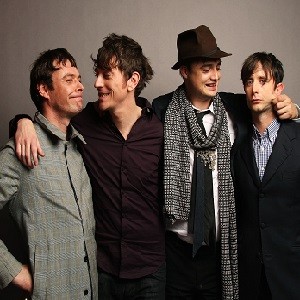 Unpredictable. If there’s one word to describe Pete Doherty live, then that would be it. You never quite know what you’re going to get from the former The Libertines man – as long as he shows up, that is – but then that’s all part of the fun. And it’s also one of the reasons why, after six years away, Babyshambles can return to Bristol Academy and still manage to pack it out with passionate fans.

There was undoubtedly a mixture of excitement and trepidation in the air before Pete and co took to the stage on Wednesday night – something only heightened by reports of the band appearing on stage 90 minutes late at their Brixton show earlier in the tour – but the boys were very prompt. The raucous crowd gave Babyshambles a heroes’ welcome, before they launched into Delivery, from 2007’s Shotter’s Nation.

It was quickly followed by new single Nothing Comes To Nothing which, like Delivery, shows how anthemic Babyshambles can be when they are at their best. Despite the strong opening and tight musicianship from the band, it was clear from the very off that Doherty was a little worse for wear. It showed in his iffy vocals, which remained inconsistent for much of the main set.

The chat from Doherty was kept to a minimum, although he did briefly pause after the opening couple songs to ask “Alright my lovers?”, before slurring his way through favourites including The Blinding and Man Who Came To Stay. Both were well-received but it was the songs from the band’s most recent record, Sequel To The Prequel that really stood out.

Fall From Grace saw Doherty’s vocal at its most effortless, as the beautiful melody provided some respite from the chaotic early pace, while Farmer’s Daughter is quickly becoming a fan favourite, with the crowd belting out the huge chorus back at the band with emphasis. Elsewhere, the furious punk of Fireman – a song that has been part of the band’s live set for years – and Maybelline sounded phenomenal.

The band’s signature songs, Pipedown and Killamangiro, sent the crowd into a hysteria, with the latter in particular prompting a drunken sing-along of “Whoooaaa, whoa, whoa, whoa”. As ropey as Doherty’s performance was throughout most of the set, the very nature of Babyshambles’ music gives him room to get away with it and this proved to be the case tonight.

After collapsing at the end of the main set, Doherty was assisted up and carried off stage by Mick Whitnall and Drew McConnell – ironic, considering they had been carrying him for most of the set anyway – but the man that returned for the encore was completely different to the one that had struggled through most of the show. Whether he had just had chance to sober up or he was just feeling invigorated following the short break, Doherty put everything into a rousing version of Fuck Forever on his return.

Normally the end of band’s most recognisable song would signal the end of the show, but this was no normal performance. Rather than leave the stage with the rest of his band, Doherty stayed on for another spellbinding 40 minutes or so, for what was essentially an impromptu jam – and a pretty fantastic one at that. The surprise set not only included a few classic Libertines songs, it also comprised of covers of Oasis, The Smiths and The Beatles.

Occasionally calling on Whitnall to return to the stage, Doherty was on top form, with stirring versions of Can’t Stand Me Now and Time For Heroes given the adulation they deserve. Then there was the rather appropriate cover of Oasis’ Cigarettes And Alcohol, which was as excellent as it was unexpected. But that’s what you get with Pete Doherty and, while he may have started the gig indifferently, he certainly finished with a flourish.