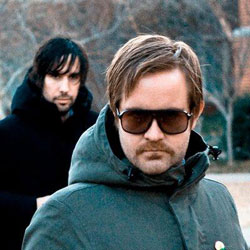 Recording and performing remain two distinct disciplines. Even with live recordings, the raw power of the likes of Deerhoof can hardly be transferred to tape.

And even with great musicians, the refined spatial constructions of John Vanderslice do not fare well onstage. Few groups like The National can strike a ripe balance in both the recording and performing aspects of being in a band.

So would Sub Pop-signed Band Of Horses have the stage presence necessary to back up the spacious recordings of last year’s album Cease To Begin?

It is Easter Sunday, but inside the dark, dank, smoke-filled room known as the Beta Bar, it is hard to recognise the holiday for all the teenage audience members and red plastic cups of cheap draft beer passed around. Any semblance of a religious observance comes with the shouted whoops and hollers from the drove of intense Band Of Horses supporters when the headlining group mount the stage. The crowd swells to twice its previous size and the dim lights somehow get dimmer.

Band Of Horses saunter on, sporting massive beards, tight jeans, plaid shirts and cowboy boots. They start to threaten the crowd with a three-guitar attack, keyboards, drums, and a bassist with light facial hair, sunglasses and a cowboy hat that resembles Ringo Starr. But when everything kicks in on opening song The Great Salt Lake, it seems like something is missing.

Despite the loud amps and Ben Bridwell’s piercing tenor, what lacks in the music is a sense of energy, a sense that this performance is truly a special one. It doesn’t help that later offerings from Cease To Begin are taken at a noticeably slower tempo than the recordings. Is There A Ghost loses heart without its rollicking tempo, and ballad No One’s Gonna Love You falls short without its sparkling guitar sounds (which the band couldn’t seem to reproduce live) and comes off mushy at a slower speed.

This lack of musical energy was compounded visually by the whole of Band Of Horses standing shoe-gazingly still, even during their most rocking moments. Showmanship is sometimes a tough sell, but you’re not getting anywhere standing in one place with a stiff smile.

Most of the songs passed by with an unenthusiastic sheen produced from three guitarists all playing the same basic rhythm parts. Some of the more monotonous moments were alleviated with musical departures away from the mix of indie-pop and alt-country that placed the band’s sound somewhere between The Killers and Son Volt. The only song performed that was written by keyboardist Ryan Monroe had a simple twang to it that could have slotted in nicely with Willie Nelson; Bridwell picked up a banjo for this number, and rustic simplicity prevailed.

Other great moments came with covers. JJ Cale‘s Thirteen Days was expertly done, but the best was saved for last. At the end of the three-song encore, Band Of Horses finally rustled up some energy to knock out a fabulous rendition of Them Two‘s Am I A Good Man. But it was a bit too late to save a set otherwise dominated by inertia.

Band Of Horses MP3s or CDs

Band Of Horses on Spotify