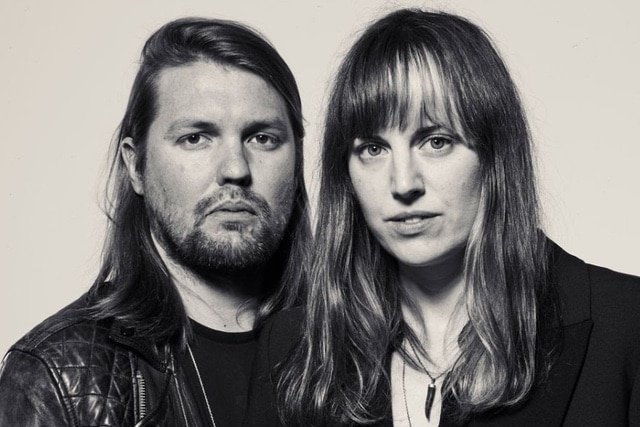 Time can be a cruel mistress, especially when it comes to music. While anniversary tours often sound like a good idea on the surface, the concept provides two very distinct purposes – such is the nature of the beast. The first, and most obvious, is the opportunity to celebrate an album in all its glory. But simultaneously working with and against that is the second purpose: the chance to revaluate said record. How well has it aged? Was it really as good as you thought it was?

These are the questions that abound as Thekla fills up in anticipation for Band Of Skulls’ latest special show to mark the 10th anniversary of their 2009 debut album, Baby Darling Doll Face Honey. Four more records later, and having parted ways with long-time drummer Matt Hayward in the intervening years, much has changed since Russell Marsden and Emma Richardson delivered their first collection of songs a decade ago to generally positive reviews.

Yet one thing that has remained constant, and becomes clear as soon as they launch into the album’s blockbuster opener, is the infectious, crackling urgency that makes up the DNA of Baby Darling Doll Face Honey. Just as it was when the record was released, Light Of The Morning is a muscular call-to-arms, one that compels a response from the crowd with its stop-start progression before unfurling into its ‘Star-Spangled Banner’-esque outro with playful joviality.

The band may have gradually tweaked their blues-infused guitar rock formula over the years as they have evolved – highlighted at the start of the night’s proceedings by Love Is All You Love from their recently released fifth album of the same name – but their ability to produce catchy hooks has never left them and from the off they have the audience in Bristol’s most iconic venue, a former cargo ship moored in the Mud Dock area of the city, eating out of the palm of their hands.

Everyone has turned up for a party and that’s exactly what they get. Instead of saving signature track Death By Diamonds And Pearls until the encore as would so often be the case in their normal set, its recognisable riff arrives straight off the back of the opener as it does on the record. It is greeted with more adulation and plenty of head-banging as the chorus is sung back with fervour before the pounding, stomping fun of I Know What I Am continues the full-throttle start.

Band Of Skulls are by no means one trick ponies, though. The scuzzy, melancholic Fires showcases their versatility, allowing those in attendance to catch their breath, before Marsden and Richardson strip it back even further with an acoustic interlude. First we’re treated to the stunning Hometowns, which narrowly missed the original album cut, swiftly followed by the achingly beautiful Honest as Richardson’s delicate vocal is allowed to truly shine through.

With the room lulled into a false sense of comfort, the one-two punch of Patterns and Bomb arrives like a bolt from the blue as the guitars are plugged back in, re-injecting a strong dosage of energy before the atmospheric Impossible encourages a mass sing-a-along to its “I am a man” refrain. And as the home straight comes into view, the heavier Blood builds momentum for album closer Cold Fame to provide a fittingly poignant climax to the Baby Darling Doll Face Honey nostalgia.

But with a smile write large upon Marsden’s face, “the afterparty” soon follows as Sweet Sour, That’s My Trouble and The Devil Takes Care Of His Own provide a cross section of the rest of their back catalogue. It’s a thrilling conclusion to a performance that reaffirms why Band Of Skulls are so well-loved. Yes, their debut may not rank up there with the greats but that doesn’t matter. It struck a chord in 2009 and, if this evidence is anything to go by, it has more than stood the test of time.