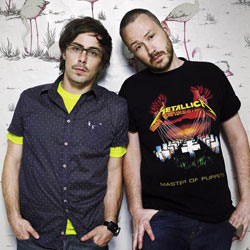 Dance music is definitely not dead but has certainly done some growing up as Basement Jaxx‘s live show at the Forum demonstrated. The death of super-clubs and the resurgence of rock music has evidently got to Radio 1’s favourite dance duo because they produced a full-throttle, amphetamine-loaded affair with recent album, Kish Kash – a sound that also transposed rather well live.

The set burst into action with the first track from Kish Kash, Good Luck, which features The Bellrays‘ Lisa Kekaula. Her powerful vocals filled the two-tiered venue nicely and the party had truly started. The first third of the set was a slick, hi-energy affair accompanied by stunning graphics and an exhilarating light show.

However the atmosphere took a slight dip with a lacklustre Romeo from Rooty, which seemed a little lightweight in amongst the new material. The flow was also interrupted by a several pauses which lingered a little too long for the hungry crowd.

Another highlight was Kish Kash itself which vocalist Siouxsie Sioux made a live appearance for. Her amazing physical presence and distinct vocals made this a moment worth waiting for. Twenty years on from the peak of her fame she still has incredible charisma and star quality. “You’re insatiable,” she sang and the audience were certainly hungry for more.

When the set, which had lasted just under an hour and a half, came to what felt like an abrupt end after a brief encore, the crowd did feel like more. With a back catalogue of three albums and a huge amount of hits it felt like there was a fair bit missing from the gig. Still, this should be read as a compliment and demonstrates that Basement Jaxx are fully capable of keeping an audience entertained with a strong variety of music, an array of energetic vocalists and a touch of theatrics.

For an outfit that never quite seemed as cool as some of their contemporaries like The Chemical Brothers or Underworld, Basement Jaxx have successfully proven that they can adapt to the changing tastes of the music industry and have never sounded better. The varied members of the audience showed how wide the appeal of this act is and by branching out with other musical influences that appeal is set to spread even more.

If you didn’t think you liked Basement Jaxx before, then try them again, see them live and you may be surprised by what you hear.