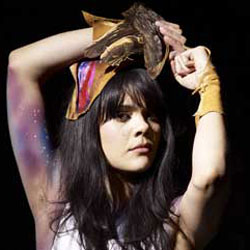 Bat For Lashes? Make that Wet For Lashes. Poor Natasha Khan wasn’t blessed with the best of luck. The heavens opened on Somerset House just as she took to the stage.

Yet thankfully this didn’t dampen the spirits of those present, the crowd revealing their true Englishness as they thanked their lucky stars for cobbles underfoot rather than a mudslide and donned protective clothing, resolutely staying put.

Khan was grateful for the effort as she drifted airily onstage. While Thames-side the scene was something akin to The Day After Tomorrow, the rain sheeting down, in front of the stage another world was being created as the music spun its web of intrigue, accompanied by nature’s very own light show.

This year Khan has been joined on stage by former Ash guitarist Charlotte Hatherley, who brought much to the overall sound with The Cure-influenced guitar, a thumping side drum and various other twinkly percussive dressings.

Speaking of dressing, Khan began in a rather fetching red, white and blue cape, moving onto a willowy costume half way through. “I haven’t played this with the hairy arms before!” she notes at the harpsichord, moments before entrancing us with a solo Horse & I.

Her voice is a lovely instrument, easily taking on the demands of the more taxing vocal numbers that approach a Bjrk-like intensity, whilst softening to a lightly-husked whisper for some of the softer material from Two Suns. Opening with the strident march of Trophy, she manages to combine sharp and detailed accompaniment with lyrical sentiments, the hook “heaven is a feeling I get in your arms” hanging around for some time afterwards.

It’s this attention to detail of the instrumentation that sets her apart, sometimes singing just over weightless keyboards with a solitary tambourine keeping pulse, while other times punching out a clubby electronic beat that suits her voice equally well. In terms of versatility she’s not a million miles from the aforementioned Icelandic songstress, but dwells a little more in the 1980s pop of Fleetwood Mac and occasionally All About Eve.

Then, all of a sudden, the rain stops and the umbrellas go down, as Daniel enters the courtyard – something of a triumph in its catchy refrain as band and punters alike realise we’ve made it through without drowning or being struck by lightning. It proves a bit too soon for that, as the heavens open again 10 minutes later, but doesn’t dislodge the warmth we all have in our hearts. We’ve seen a talented and versatile performer, who makes even a wet Thursday night outdoors a beguiling prospect.