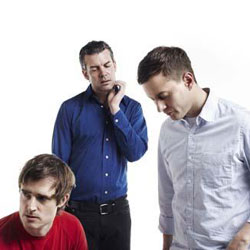 Battles divide not into camps of like and dislike, but into viciously passionate tribes whose respective mantras would concisely be captured as either “Holy shit in a BOX! I LOVE this band! I must sell everything I own just to buy their every utterance on obscure 180gram vinyl”.

Or, conversely, “Forsaken! Christ has forsaken me to a never-ending purgatory of earbleeding, synth-twiddling, ballsack-sampling WANKERY. And the name of that hell is Battles.”

Of course, if you and your chums are of a broadminded ilk, such vitriol may surprise you – so here’s a little vignette to set the tone. See, tonight’s Concorde 2 show – Battles’ third in as many years here in Brighton’s premier beachside haunt – is amply represented by both sides, and the whole love-hate tale plays out neatly.

The fanboys are the majority at the off – buzzing with a near-religious fervour that lends a cult-like intensity to Battles’ own mania. First, there’s the cheers that greet the entry of the Giant Cymbal – raised seven feet high after a snowboarding accident left drummer John Stanier unable to hit any lower (an injury, by the way, that’s rendered simply unbelievable by the ceaseless pummelling he goes on to unfurl). To be fair, there is something entertaining about its gangly, looming presence (Stanier often suggests it’s actually done purely for fun), but this lot greet its arrival with ululation and cacophonous cheers befitting some totemic deity.

Then there’s the surprise presence of Dancing Jesus – a fan of an oddly Christ-like appearance who does a neat job of summing up the supporters’ large club-culture demographic. He’s so animated by the New York’ trio’s experimental flood of noise that he spends a solid hour in some kind of joyous fit – twitching beneath his cardigan to the syncopated wah-wahs of Ice Cream, flinging his Redeemer’s arms around the complex rhythms of Africastle, and gurning curiously through his supernatural beard to the eerie echoes of Kazu Makino‘s vocal on Sweetie & Shag, seemingly blissed out by the intriguing, breathy softness tat she lays awkwardly on a nest of quirky bass and leftfield samples. By the time Gary Numan appears, Wizard-of-Oz-like, to deliver his guest vocal for My Machines from two giant video screens, Dancing Jesus is grinning broadly, yet wracked by wild convulsions that cavort him about the floor in a possessed-by-Legion-demons manner quite unbefitting the son of the Almighty. Wonderfully sacrilegious.

And finally there’s the possessed – the crazed and tattooed gent who runs, fevered, around the crowd throughout, stopping only on the arrival of Matias Aguayo on the video screen – whereupon his knees buckle, his hands claw the air, and tear-filled eyes look, terrified, to the skies as if he’s having some glorious, yet horrifying, Damascene conversion.

And this odd troupe is, in some way, exactly Battles: electrifying, adventurous, and pumped full with a danceable, synth adrenaline of a simply untouched potency.

But, while such hyperbole belies the haters, the steady flow of disillusioned seeking an early exit suggests they’re real enough. The gig’s inauspicious start no doubt does for many – a tour-bus failure en route leaves us enduring an hour’s delay post-warmup – while for others, it’s the torturing of riffs on Futura; the unwieldy samples on Atlas; the unremitting, proggy swirl of Inchworm and others. For the uninitiated, Battles’ non-stop synth mash is no more than a painful, brain-melting mess of unendurable aural hostility – and the notably thinned out crowd by the close suggests tonight produced few converts.

Yet the rapturous cries for encore, persisting for an age with something approaching frenzied pleading, confounds the critics. These passions prove the band are more than try-hard knob-twiddlers, and for the Battles-hardened, it’s doubters be damned. If that’s you, don’t lose heart – because now you know: every time they play, somewhere, somehow, Jesus is dancing.