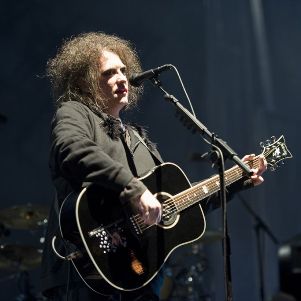 Given the dubious nature of the UK’s summer, homegrown festivals could really be in trouble as scenes of muddy chaos are repeated ad infinitum across the land.

Those without enough timber to build an ark are beginning to look at the European festival circuit for some drier entertainment. BBK Live, held at Kobetamendi overlooking Bilbao in Spain is as good a Mount Ararat as any. With a couple of legendary headliners in the form of Radiohead and The Cure, together with more localised talent and some festival veterans it promised to be an exciting few days.

The first thing that strikes you is how staggeringly corporate the festival is. The BBK in BBK Live is a Spanish bank but there are other sponsors’ logos festooning every available space as far as the eye can see. Security guards at the gates confiscate food and drink, even bottles of water, to create some strange utopia where everyone is forced to eat and drink the same products while our corporate overloads watch us from their conspicuously placed VIP boxes. The festival even has its own currency, which is never less than a pain in the arse to have to deal with (eight plectrums buys you a pint of beer if you’re interested).

It’s tough times for everybody – certainly in Spain where footage of austerity protests in Madrid featured heavily on the news over the same weekend – but there’s a fine line between a commercial partnership and a Faustian pact. The only relief is to concentrate on the stage action, even if it does involve the firing of branded beach balls the size of Saturn into the crowd in the vain hope you’ll choose this particular airline for your next holiday. At one stage there was even a radio controlled scale model Vodaphone zeppelin buzzing around the site like a giant hornet. In this environment Jarvis Cocker words in the ’90s festival anthem Sorted Out For E’s And Whizz seem to take on an Orwellian poignancy: “Is this the way they say the future’s meant to feel?”

Two UK bands eased everyone into the festival spirit. Band Of Skulls warmed up the main stage with their difficult-to-dislike rock hooks and The Maccabees displayed typical genius on the second stage. Given To The Wild looks set to be one of the albums of the year and the group ably performed the tracks to a willing and enthusiastic crowd.

The roster of acts performing at BBK Live seemed to have a rich seam of well-established festival pleasers running through it. Many of these had huge hits several years ago but have arguably been coasting it ever since. Snow Patrol was the pick of the bunch and cannily didn’t save the likes of Chasing Cars to the end of the set. Their time on the main stage was a good example of festival veterans performing at their best and this is certainly helped by the fidelity throughout the site. It’s easy to find a spot where you can see and hear the acts and this contributes to the relaxed vibe of the festival.

A technical hitch threatened to derail The Cure‘s set but Robert Smith obliged the crowd with a short solo set to keep us occupied. Naturally the internet became awash with exaggerated rumours of an historic solo set, but this was nothing more than a nice bloke wanting to keep his fans entertained while they waited. Every round of applause was greeted with a humble “Don’t go giving me ideas!” before Smith went to fetch the rest of the band. Although sometimes overwhelming in its length, their set was a comprehensive reminder of just how good The Cure’s legacy is. The post-midnight start luckily meant that the stunning set was not curtailed and they were still playing well past 3am, far surpassing the stamina of most festival goers.

The late running of The Cure meant a clash with Bloc Party who delivered a shot of adrenalin straight into the eyeballs with a vibrant and resurgent set. It’s a shame they were tucked away at such an hour, but it’s good to have them back and firing on all cylinders once again.